The last few months have been nothing short of hectic for both these politicians. Both of them have different AGENDAS.

However  on cyber/social media they are One (1) 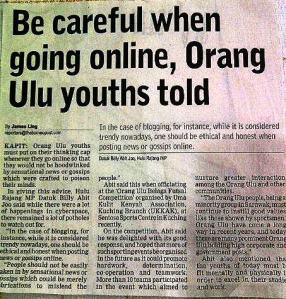 Billy Abit Joo MP since 1990 is fighting to get renominated by his party PRS where he is a Vice President. His President James Masing has clearly said and we extract the quote,” A good leader must be able to read the writing on the wall, and monitor the feelings of party members“You must always ask yourselves this question; do they still want me? Please never overstay your welcome, for if you do, it will have tragic consequences for the party including yourselves,”

Ahmad Zahid elected in 1995 is in his 4th term and GE13 will be going for his 5th term. He is currently the Minister of Defence assuming the posts vacated by PM Najib Razak. As Vice President of UMNO he had mentioned in a bernama report that ,”Elements of sabotage in the last general election must stop to ensure victory for Umno candidates in the 13th general elections.

Moreover he did not mince his words as he was quoted and we extract here,”But what is worrying the top leadership are those division warlords who insist that they are picked as candidates regardless, and this will lead to problems.

“A general who is armed with a sharp sword will lose a battle if he has no soldiers to back him up. For this reason, we must have an army behind us, apart from the support of all.

He said a study revealed that good candidates could contribute 31 per cent to victory, and solving internal problems would contribute more than 50 per cent.

He stressed, other than the need to give full support to candidates picked by the top leaderships, the members must forget personal interests.

Billy Abit and Ahmad Zahid  will be hoping that both of them will still be renominated on a BN ticket going into the GE13. It will not be much of a problem for the Minister of Defence to be renominated unless he decides otherwise due to reasons which might be personal.

Billy however has already been told in so many words and he has no choice but justs ,”Lawan Tauke” and see who is the bigger “Tawke” who will be backing him up.

Zahid knows the importance of cyber and he like Billy knows that influence of the new media such as the blogs, twitter and Facebook, were seen as contributing to the rejection of BN in the last elections. Billy has sound advice for his people and he knows his people the Orang Ulu Youths will stand behind him also to be renominated.

Both can do so much only and both have made their case known for the BETTER GOOD of Barisan National.

Will both be renominated as candidates ..?

This we extract from an internet portal on cyber by Ahmad Zahid Hamidi:-

Umno vice-president Ahmad Zahid Hamidi said the Barisan Nasional machinery is ready to fight in the cyber world to garner support in the coming general election.

“Our party machinery through the new media is prepared to fight off all the baseless allegations made and give the right explanation and information to the people,” the defence minister was quoted as saying in Utusan Malaysia.

“The opposition has no other way but to find issues that will tarnish the image of the national leaders in the cyberworld. We will not follow the opposition’s tactics to use slander,” he said.

Ahmad Zahid also wanted all BN leaders at all levels to be prepared for the opposition attacks, especially as the general election approaches.

He urged the opposition not to adopt such underhanded tactics, but to fight maturely by promising and implementing what they had promised in their manifesto