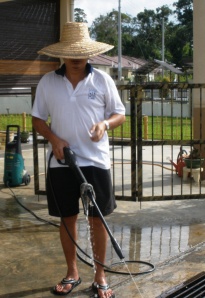 Campaigning for the 5766 chinese votes are at full swing. There are all sorts of methods and ways of campaigning to woo for the voters. A BN supporter said to audie61 we must be,”Innovative and yet Practical. The people will surely vote for sincerity.

It’s Chinese New Year in a weeks time and if 5766 BN supporters do their part by helping to clean up and work their ways to the hearts of the Chinese Voters many will appreciate it. Only at this by elections can this “IDEA” be appropriate.

We must get rid of the Perception that BN only throw goodies and have “mee-segera” Pakatan has their ways and they will not ‘resort” to campaigning of these sort.

on behalf of audie61 management and crew we would like to express our condolences to the family of the late Tenang assemblyman Sulaiman Taha who was called back to the “Almighty Creator” this morning.

May his soul and the souls of all the faithful departed rests in peace.

With his death, the Election Commission will have to call a by-election – the 14th since the 2008 general election – in 60 days. Umno secretary-general Tengku Adnan Tengku Mansor who was at the hospital told reporters that the Barisan Nasional was prepared to face another by-election

It is expected that the by-election will be held in January next year before Chinese New Year, which will fall on Feb 3.

Tenang is one of two state seats under the Labis parliamentary constituency. The other state seat, Bekok, has been consistently won by MCA’s Tan Kok Hong