Where do we start with these two political leaders? 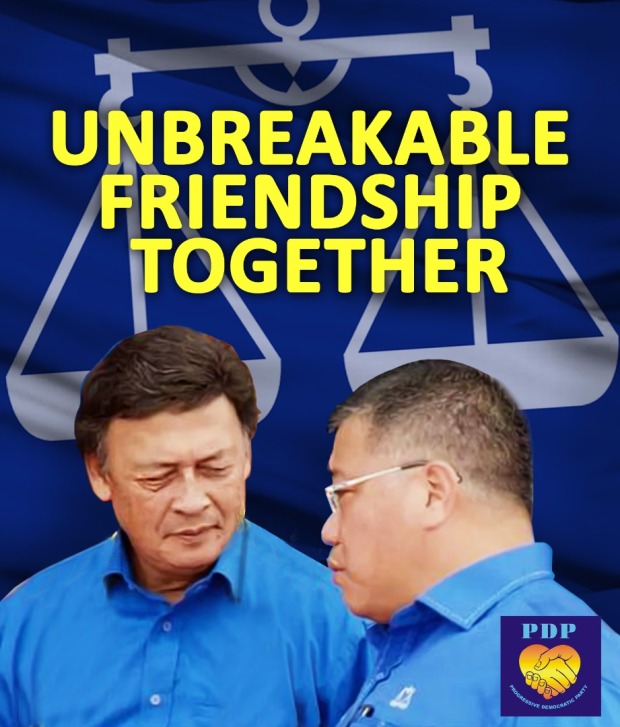 This saying best describes both of them,”Good Friends are Hard to find, Harder to leave and IMPOSSIBLE to forget” Audie61 is not about to apple polish both of  them but stating the facts which in a way is due to the significance of their year of birth of 1949 and 1961. One has to look at their strengths and weaknesses but we will not dwell too much on it.

They both have gone through many battles together since the SNAP days till today and have SCARS to show for their endeavors which have made them stronger and determine to ensure their own survival in today’s seemingly harsh political environment.

Both of them however have very strong Barisan Bond and the phrase below will see them through these most challenging of times and it will be sooner rather than later where you will both see them together for the better good of the rakyat of Sarawak.

“We must not allow such sense of emotional attachment to get the better of us until we take a compromising stand on SOME POLITICAL MATTERS and fail to see the bigger picture that concerns the health,unity and stability of the State Barisan Nasional. There is no problem that is too big or small to be taken to the Barisan discussion table and be resolved in the true spirit of the Barisan Nasional.”

Many attempts have been made to get these two political leaders to be together through various forums,press releases, discussions and very soon as they say,”SOONER RATHER THAN LATER” the parties will unite in the spirit of diplomacy of Barisan Nasional. Sun Tzu has made it clear that the “art of diplomacy is essential for the success in waging war,especially when alliances have to be forged”

The top  Barisan Nasional leaders in PM Najib Razak and State BN Chairman CM Abang Jo are just waiting for them and they should not be further delay with the IMPENDING GENERAL ELECTION 14 around the corner. Negotiating parties are seen in deep discussion in the last few weeks and word has reached the ears of both the 2 top leaders.

Tiong in many of his press releases have been very gracious and kind to Mawan and they have met a number of times to talk on the issue likewise Mawan with Tiong. A very good indicator has come from the SG of SPDP Anthony Nogeh who said this,”“I have met up with Tan Sri off and on. It is very clear that he has shown the intention of returning to SPDP.  And we welcome him with open arms,”

Mawan himself is very clear on this matter and he would be very happy and contented with the “Status Quo” on all the incumbents on the parties ticket for the upcoming GE14. He knows together with Tiong,Anyi,Nogeh and himself they will all be “Winnable” candidates for Barisan Nasional. This partnership of experience with youthful vigour ,determination and concensus on all members will benefit the party and BN in all totality.

Our earlier write up https://audie61.wordpress.com/2017/04/17/p205-saratokone-more-termfor-mawan/ has caught the imagination not only by the top political leaders but also leaders in the constituency of Saratok.

They have come out in numbers and pledge that Mawan is very much in their radar as the peoples choice and voice of Saratok Parliamentary Constituency. The picture speaks for itself and PM Najib,CM Abang Jo and Party President Tiong will know that Mawan is still needed by them.

The stage is set for Tiong and Mawan who both will find “COMMON GROUND ” in their political journey and the Youthful Vigour of Tiong at 55 years old will look to his Friend of many years and experience Mawan to guide him through for many years to come.

It is without a doubt as many in the political field would want,”Inch Perfect Friendship and Partnership” where even the most turbulent of political crisis would see these two ‘GENTLEMAN’back together to give added strength to the Barisan Nasional diplomacy.

A former Assistant Minister in the State cabinet who relinquished his posts in the last state elections said to audie61,” Tiong and Mawan are the best of friends and he sees not much problems ahead for them and their faithful supporters to be back in One United  Family which will augur well for the Barisan Spirit in view of GE14 around the corner.”

In all due respect the path is set for both Mawan and Tiong to be walking and working together to achieve the 100% for the party which in itself will not go unnoticed by the Barisan Nasional Leadership.

This Unbreakable Friendship Together will provide an eye opener for many.

Through the years audie61 have seen this menacing lawyer going through his work full of youthful zest and enthusiasm. Of course, his package doesn’t come across as Mr.Nice plus someone who is “Love to Hate him” but there is a catch,” He gets it done.”

In his first foray into the “elections world” in 2016 he stood on BN/SUPP ticket in the Kota Sentosa Seat against the “mighty” DAP Sarawak Chairman Chong Chieng Jen. The result as many have predicted that he would not stand a chance. The ground talk ,”Sacrificial lamb plus no wants loves him.” Is that so?

Many Kota Sentosa constituents are now regretting it by not putting him in as their “Voice” in the State assembly. Wilfred Yap is very menacing when you are first introduced to him. He is a six footer,walks very fast, his handshakes are firm plus his voice is not EXACTLY SOFT.

Many though would crave for his voice especially those in politics. He would have won a long time ago if he was a “DAP Candidate” during SUPP turbulent years. If he had taken a bite of the DAP’s cherry. Many young leaders left for greener pastures or retire early as they could not take the “losses” to once a strong party. He stood firm with the party and today he has been appointed as ” Public Complaints Bureau Chief” and also a Councillor of Padawan Council.

He has been working or as they say “turun padang” and criss crossing the constituency of Stampin. The President of the party Yb Dr.Professor Sim knows Wilfreds Potential and knows that the “people of Stampin constituency” will take him in as “their Stampin voice and adopted son” in Parliament for GE14.

Wilfred said on his walkabout,”its really a good feeling now that people are coming up to him,shaking his hands,tapping his shoulders and giving him encouragement for the Stampin Parliament Seat.” Previously in his first foray in the State elections he was all “gungho”to fight DAP but there wasnt the genuine warmth and sincerity from the people then unlike now when he is weekly attending to their needs.

The SPCB “Supp Public Complaints Bureau” seat has indeed been a blessing as this service is 24/7 and he is attending to all the needs of the people who ask for help or assistance. The “Hate”syndrome of this young lawyer is finally been tested to the fullest. He is seen daily in the media and in the social media world. There is no escape from the watchful hawks eye and it will very political disaster if he fails to deliver on his words.

His earlier  involvement in an NGO Jaycees International which has “service to humanity is the best work of life” is being realized. The President of the party Yb.Dr.Professor Sim knows that Wilfred will come good and to win over the Constituents he will have to put Wilfred through the “mill” with the most stringent test.

Of course when the road is already been build it will be easy for many in the party to want to be the party’s candidate too. Wilfred sees that “factional infighting or mere sabotaging” on his candidacy will be very incessant. He believes in his party that SUPP that they will make the right choice and will support whatever decision the top leadership makes.

Meanwhile he will continue to serve for the better good of the constituency and will reach out to all Sarawakians whatever race,religion,colour,culture or background.

The opposition will not only hear him now but if he is blessed with the Stampin Candidacy and elected he will not let the people and his party down. He knows too well the feeling of defeat after his first outing and he will not want to let the BN Chairman PM Najib Razak, State Chairman CM Abang Johari,President of SUPP Yb Dr.Professor Sim and his party go through the process of anguish and defeat. This time,he wants to do it more for the people of Stampin Constituency and let them be assured that they put the right man there.

The Stampin Parliamentary seat is a very “winnable seat” for Wilfred as he has his trump cards up his sleeves. The BN Strategic and election support team needs not look further than Wilfred and need to give him their “Fullest Support” to make it a resounding victory for BN and SUPP.

Wilfred was grilled and attacked mercilessly and directly from audie51 team and he felt the full brunt of our force.

We ended with this “if good men look on and do nothing the bad men need no better opportunity.” Wilfred smiled and said ,”He is ready for this next phase of challenge in his life and there are no inbetween.”

His Party President, his party comrades plus those who sees his overall potential knows best. He is menacing yet very passionate towards his work for the people.

MP Saratok TS William Mawan will leave it to the Top Leadership to pick the “winnable candidate” for GE14.

He has made his reasons known to the constituency and the ground support is evident when he goes on a walkabout in the area. Mawan also knows that the opposition will not rest on their laurels to capture this seat.

The BN ruling government knows best and they too will look at Mawans track record and will give the ticket based on all the reports submitted.

PM Najib and CM Abang Jo will have their final say and they will not want to risk a “winnable seat” .

GE14 Saratok will be delivered to BN based on the winnable candidate and track record.