We are trying not to be fooled but this statement as reported by bernama does make  Sarawakians look like fools or be fooled. Read how you want but it cannot be misprinted correct?

“It is a big task for us to make them realise that we are actually a national party representing everyone at the national and state levels.

He said DAP was more successful in Sarawak as they were not considered a “peninsular party”. – Bernama

9 years ago when they were both in PAS if  Mat Sabu remembers these words,maybe he forgot he is now a big boy Amanah Malaysia President what Hadi remarked and we extract from the Star online :-

Hadi had angered Sarawak’s Iban community when he blamed PKR’s loss in the April 7, 2010 Batang Ai by-election to ignorant voters who did not know how to vote and “were still wearing loinclothes”.

Malaysia should by now be one of the top nations in South East Asia but somehow we are all left in a time capsule.

So DAP a “peninsular” party has since become a local based party with local Sarawakians as the Branch Chairmans? 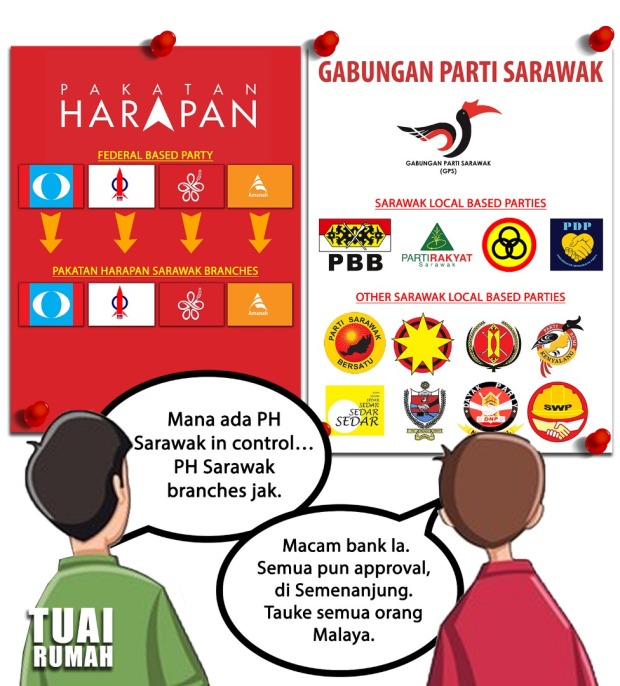 Are we all caught in a Quagmire?

Most of us in Malaysia are caught in more troublesome everyday living than to be caught in a religious incitements and playing sentiments.

Oh Gosh! Really.. Malaysian Government now being threatened by an Indian National  who was given a Permanent Resident Status in Malaysia but in India he is wanted for corruption-charges,money laundering as well as terrorism related charges.

Zakir should be a good boy and stay quiet but instead he has stirred up a hornets nest in Peninsular Malaysia and also being seen as a thorn in the flesh for the Hindus and the Chinese.

A Muslim friend of ours said  Sarawak should not get involved in this Zakir Naik controversy and stay out of it. Let the Chief Ministers Department deal with it and issue a statement.

However,politicians being politicians will use this platform to say their pieces and of course we have over the few days seen many statements from Sarawak Ministers to Assemblyman to Non Governmental organisation (NGO’s)

No one wants to miss the Train which majority of Sarawakians if not all are against .

Religious Bigotry,Incitements,Extremism,Fanaticism which will jeopardise the racial, religious harmony and harm the peaceful coexistence of all races has no place and is not WELCOME in Sarawak.

So be careful especially what you say and we are sure that our late and former Chief Minister Adenan Satem would have said this to Zakir Naik,”U ARE NOT WELCOME IN SARAWAK AND BAN”

DON”T YOU THINK SO?

This “silver jubilee or written 25 years ago political book on Sarawak and Sabah” stood out like a Sore Thumb in my bookshelf. Little did i know that it will play more than a Significant Part in this “battle of the century” article.

Of course, we know we will incur the wrath of many politicians as we will be “ENCROACHING ON POLITICAL SENSITIVITY”

Furthermore as the writer of the book told me in no uncertain terms” today we have many more theorists,political analyst then our Time as today with the WWW (World Wide Web as long as one is connected they can give their opinions and theories very quickly. Times are Changing and so will be the Administration and Systems of Government . 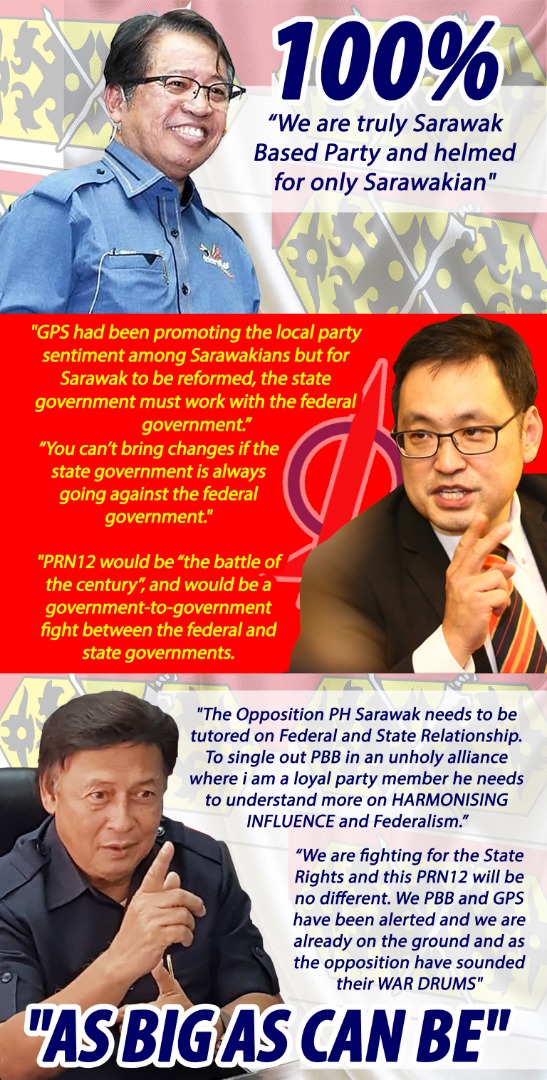 When PH Sarawak took aim at Parti Pesaka Bumiputera (PBB) a Coalition partner of GPS undoubtedly “The war drums are heard as far of from the constituencies from the Southern tip of Lundu to the Northern areas of Limbang.”

The Fear factor which was spelt out by the PH Chairman Chong Chieng Jen who is also a Deputy Minister towards PRU15 in so many words means “he himself is so afraid that his position in the Federal Government is Shaky to say the least.

Why do we say so? What is he implicating?

Has he cooked up AN ANGER DISH which he himself will live to regret.

Sarawakians knows that the present Sarawak Government is State Run now after the State cut its ties with the Barisan Nasional Coalition and formed a Sarawak Based 100% Local Coalition. There is nothing wrong with this concept and in politics its only normal.

Furthermore, Pakatan Harapan (PH) Sarawak are not local based parties as they are only branches of a big tree from PKR,DAP,Bersatu and Amanah. The local party leaders cannot have full autonomy and they need to seek advice on their decisions from the Federal Body.

Needless to say there were many promises bragged by PH Sarawak leaders during the “BIG WAR” in PRU14 but mosts of the promises in the manifesto are still in the cupboard gathering cobwebs and dusts.

We have heard from PH Sarawak Chairman calling it a “Battle of the Century” which in itself is a very clever ploy in that its drumming up support and trying to cover up the misgivings of the PH Government which was promised by their Federal Leadership and telling Sarawakians this is it.

This time he might have got it right so we think. This scenario to ensure that DAP has everything in his control and to win the urban seats he unleashed in his little corner of the ring,” yes i have managed to not only irk PBB but also the others Bersatu ,Amanah and especially PKR to deliver their quota of seats in this battle of the century”.

Was it deliberate done as part of rattling up everyone?

PH Chairman has not hidden his intentions well enough but he has woken up the sleeping giant in the Sarawak Government. Not only that he has got some Full Federal Ministers from PH to come out with statements which are not supported by facts.

We do not need to get into details as its a known fact given full publicity in social media and main stream media. The Deputy Minister or PH Chairman is very quick witted and we must also inform him to do some extra research on Federal and state Relationship.

He could place an order for this book no doubt and not using his law books for political arguments. This he must realise and we extract it out so that he will not feel belittle

“Federalism is perceived as the mode of political organisation that unites several polities within an overarching political system, and is done in such a way as to allow each to maintain its own fundamental integrity.

The Federal system, as in the case of Malaysia, does this by requiring that basic policies be made and implemented through negotiations in some form, so that all members will have a share in making and executing decisions.

The term “FEDERALISM” therefore denotes the unification of separate states into a federal polity and also the permanent diffusion of authority and power within a nation among several state governments.”

Also he must be tutored as per a former experienced Senior Minister said of  the Sarawak PH Chairman that he must know that meaningful and cordial Federal-State relations are founded on understanding,tolerance, and commonalities,most of which are SUSTAINABLE through network and arrangement rather than dependence on the provisions of the constitution.

There will be differences a plenty for PH Sarawak as they jostle too for seats in the coming PRN12 Sarawak as until recently there were 3 parties involved but now Bersatu has also come into the picture and their President does want seats to be decided too by the PH Presidential Council instead of just by Sarawak leaders.

Does PH Chong worry too much if he loses in the PRN12? He will still be a deputy minister even though his credibility will take a beating. His rhetoric’s are done as he has nothing to lose says William Mawan who is also PBB Supreme Council member.

PH has declared it a battle of the century and the war drums are already sounded and as an assemblyman for Pakan he has called upon all GPS leaders to be on the alert now and the time is now to fortify their strongholds.

PH will come down with guns blazing but as an experienced campaigner and full of tenacity he would be able to assist and strategise together with the other GPS GENERALS to fend off the threat and give a massive body blow to PH. He knows too this is Sarawak state elections and not a national elections and Sarawak Sentiments will be localised.

Of course, Mawan said that GPS must start getting the necessary machinery up and going. He himself is always on the ground and getting the base support fortified and reinforced as he knows the fire will engulf if he does not hands on in his constituency.

The Fire would be “AS BIG AS IT CAN BE” and GPS leaders must strategise well to use their “LETHAL WEAPONS” to douse this threat.

PBB and GPS knows now that the Big Battle is looming. We are prepared as far as we know says Mawan the batlle has already begun. This seat belongs to PBB and our mission is we must not lose this seat.

The GPS Generals have to know too that the battle of the century as per Chong will be more sophisticated and we might need more than resources to counter the imminent threat.

“War Room tidak boleh tunggu’ Generals offices have to be occupied with team players for all inputs and information.

The time is now says Mawan and he knows the Chief Minister would welcome extra brains to assist him too.

It must be noted that Sarawak has been able to benefit tremendously for the good Federal-State relations in the past decades as it has adopted a ‘realistic and proactive approach in resolving many potential state problems and issues.

When a war cry is being sounded “battle of the century’ and Chong also belittling GPS Government is small and PH Federal Government is big and also saying let’s fight an assistant Minister of Corporate affairs Abdullah saidol said it is rather unfortunate that this cordial working relationship would be threatened by such hostile statement.

CM Sarawak did not mince his words and he too said,”Gabungan Parti Sarawak (GPS) is ready for an all-out “war” with Pakatan Harapan (PH) in the coming state election. If they want war, then we will go all out to face them.If the war does happen, we must get our logistics ready. We must have the correct bullets to “shoot” our target correctly.”

You must not let the general fight the battle alone,” he said, referring to top GPS leaders.“If the soldiers do not back us, then we will suffer. The soldiers and the generals must work together,”

We mention earlier that the PH Chairman might live to regret his wishes and with the Sentiments of Sarawak being tested to the fullest by the Federal government the other PH Leaders in Sarawak will need to know that they are skating on thin ice.

Are you enjoying the DISH that the PH CHairman prepared for you?

CM Abang Jo hinted very forcefully,”If the war does happen…..” One can only read and tell Chong not to read his law books but to use his cerebral cortex and read the ground sentiments  carefully.