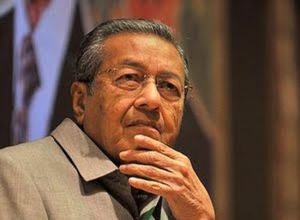 Tun Mahathir is not everyone’s favourite leader. Many love him for his “quick witted tongue” on some issues but many also “loathe” him for his ruthlessness. But when we saw this statement from him we just can’t help but Applaud his Openness. What else could he say on UMNO when the party are due to have its election year.

This we extract,”  the party itself is not the problem, the problem is the people who run it. If you do not know how to run something, then the best organised organisation will not help.”

ISN”T THIS HAPPENING IN BN COMPONENT PARTIES AS WELL? Mahathir does not want to to be caught meddling in other component parties and that’s why he touched his own party.

Fair enough though but we know lately,some youth SUPP members have indicated and complained to us and since Mahathir has set the ball rolling it is indeed something to ponder for BN parties.

Does Mahathir need to spell it out in FULL?

This is the Malaysianinnsider article:-

Umno is losing out to PAS in the battle for young talent, with doctors, lawyers and engineers joining the Islamic political party.And the reason for this trend: Umno leaders fear those smarter than them.

Former Umno president Tun Dr Mahathir Mohamad  who held the helm for more than two decades told reporters at his Hari Raya open house in Seri Kembangan today that, “the party itself is not the problem, the problem is the people who run it”.

“If you do not know how to run something, then the best organised organisation will not help.”

He also said that the party has to attract younger people as some of the leaders have been there for far too long.

“They will need to re-examine themselves, because the party has become old and a lot of the leaders have been there for quite a long time. The young people don’t find the party attractive anymore.”

Dr Mahathir added that the younger generation seem to want to play a bigger role but looking at the leadership at state and national levels, it looks like they are not given the chance.

“So the problem is this… Umno don’t like and fear ‘people smarter than their leaders’,” he said, adding that as a result of this the credible ones from the party join PAS.

The former prime minister also pointed out that previously, PAS had ustaz as members only but now they have lawyers, engineers and doctors.

Still an influential figure within the party, Dr Mahathir in an open letter to Umno members earlier today, said the Malays must not sabotage Umno in the coming party elections.

This, he said, is because Umno is the only party which can ensure that Malays profit.

He acknowledged that the ruling party has lost touch with the Malays as its members are more interested in pursuing their own individual interests rather than helping the public.

“The spirit to fight for the people, religion and country is no longer present. There is no loyalty to Umno because allegiance has now shifted from the party to selected individuals,” he said in the letter published in the Umno-backed Malay weekly, Mingguan Malaysia.

“Members are bribed with money, overseas trips and to perform umrah. With that, all Umno members are involved in bribery by selling their votes for money,” he said.

However, Dr Mahathir said the party still has much to offer to Malays compared to opposition parties.

“Accept the reality and be thankful. Do not complain that no benefits were given despite years of supporting Umno,” Mahathir added.

The focus after the Hari Raya Celebrations will turn to two(2) BN component parties. UMNO will hold their elections on October 5th 2013. Any movements will definitely be closely watched by all as the outcome of the UMNO elections affects the leadership of the country.

The Tiff between Tun Mahathir and Tun Abdullah is being monitored very closely. There are also clear indications that camps are already mushrooming. Many in the social media blogs, mass-media fraternity and bloggers aligned to their respective camps are already “ON TOP” of these developments.

Many in the “UMNO family” will be divided as to their choices of  candidates and though the fight might be very bitter it might even caused ‘some permanent damage“. It is only normal to have elections in a democratic process but once the elections are over everyone must be able to accept the lists of elected officials and close ranks. It’s of course easier said than done.

The UMNO elections will also have some effect on the local based BN strongest component party PBB. The youth elections will be again be the centre of attention as there are nearly more than half over 45’s who are ineligible to be part of the movement. Even the incumbent Youth Chief Fadillah Yusof who is now the Minister of Works is still undecided on his posts.

The Wanita Wing will see some changes at the helm as it will only be relevant to have an assemblyman or an MP to helm the wing. This might not go down very well with the current Wanita Chief former Senator Empiang who led the wing very well and have succeeded in grooming able leaders in Rohani, Nancy and Fatimah who are all full State and Federal Ministers.

The rantings, divisional meetings will go full swing to pick the leaders who will be the next echelon leaders to lead the party way beyond 2020 if their paths are politically destined.

The Top Leadership and Supreme Council seats might not see much changes but they will be a lot of horse-trading. It’s a clear signal from many YBs when we went on the ground that they will see that the No.1 and No.2 posts be maintain at status quo.

It does mean that the President of PBB Taib Mahmud and current Chief Minister of Sarawak will have unanimous support from all the 71 divisions to lead them for another 3 years.

When and What the party PBB has decided it will be foolhardy for anyone to signal even the slightest hint that they are about to take over. The Party President has indicated that his successor is not only the Chief Minister for one race but for all races in Sarawak. This will be the yardstick which not only UMNO leaders have to toe the line but all who are within the FRAMEWORK OF THE STATE ADMININISTRATION.

The ball has been rolled by some UMNO face bookers and bloggers aligned to certain leaders and they will use this social media machinery to their fullest advantage. Those who think that their grassroots are strong without using this technology have something coming their way.

PBB leaders will also not want to be caught out without making use of the ready made machinery and they too are promoting themselves to be seen,heard and most of all acceptable by the ones who matters most.

UMNO elections will have a determining factor on PBB and though some say no way but truthfully they know its a FACT.