The next 11 days its the battle of the fence sitters in some of the “hot seats” which will determine the fate of the candidates in Sarawak and also in Malaysia.

The parties in question who are participating in the GE14 must know where,what and how they are going to get the “FENCE SITTERS” to put a mark to the ballot paper for their candidate.

The party campaigners and candidates know better and they must work the ground(….that extra will not come to them on a silver platter.!!! 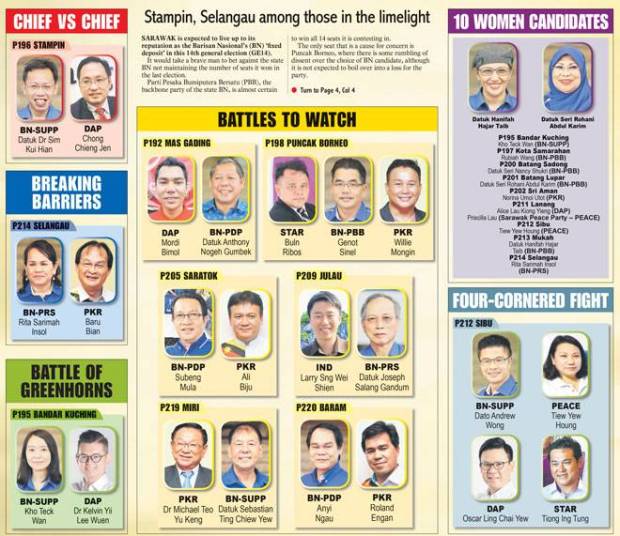 GE14 Sarawak would even play more of a significant role even though what has been written in Bloomberg{ extracted),” He lost the popular vote in 2013 but won a narrow majority of seats in parliament. In his first international interview in more than three years, Najib said he’s “reasonably confident” he’ll do better on May 9. 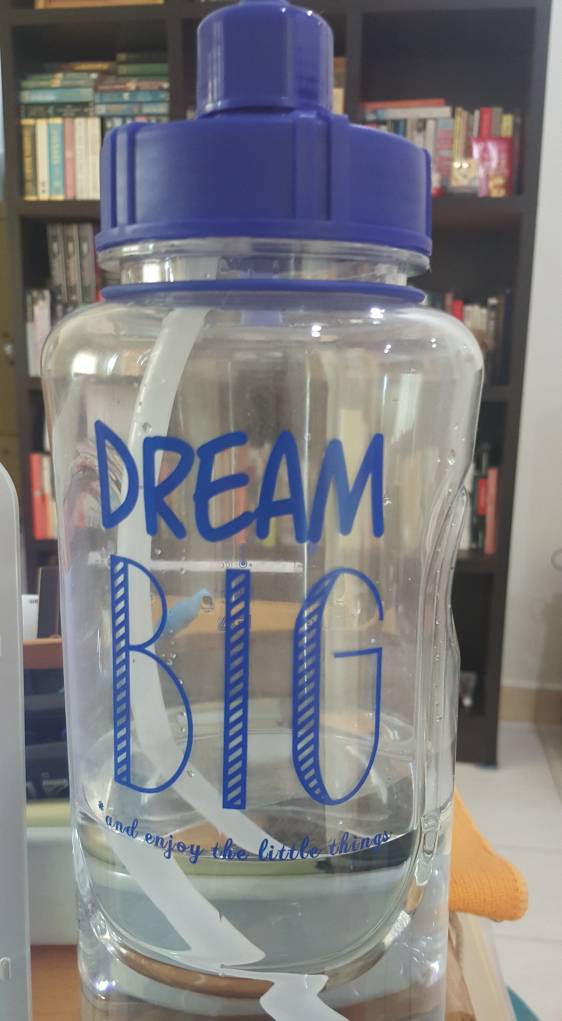 This time around Sabah would be tested to the fullest while Sarawak with CM Abang Jo is confident of winning 29 out of 31seats.

ONE WONDERS WHY HE IS SO CONFIDENT OF THE NUMBERS?

This is for a fact that there isn’t much issue to address in Sarawak as the Federal government has delivered to Sarawak and many others are in the pipeline and committees have been set up to look into the requirements.

Sarawak Federal Ministers who served in Najib’s cabinet that is Wan Junaidi, Fadillah Yusof,  Rohani Karim, Nancy Shukri,Richard Riot,Joseph Entulu have worked hard and are seen criss-crossing the country and also made a mark for Sarawak and Malaysia internationally.

They have all set a very high standard for themselves and are role models for all to see.

We extract something here which should be revisited after GE14 even though we have now the 1.TRANS BORNEO HIGHWAY 2. LRT 3. DIGITAL ECONOMY

A vice chairwoman of the wanita wing Winnie chipped in, “Give to us Sarawak 20% and we can built a  “Railway from Lundu to Lawas” You know, we only have dual carriageway from Kuching to Limbang( Trans-Borneo Highway hehe.) What lah! Penang talking of just a monorail to solve the transportation system of the state before it reaches critical stage ?

Colin, the youth chief praised the the PM eventhough he comes from Penang there are no “Preferential Treatment“.  Thats more like it. Dont just bend for the sake of bending, there are other ways to overcome a problem. The way I see it weblog has this ,”I bet you that you will not get special treatment like Sabah and Sarawak, due to that there are not many BN MPs from the state to the Penangnites he said.(Well at least not many leaping frogs)

CM Sarawak and his team after GE14 must also think of opening up Sarawak countryside to the world by pursuing the “Railway that will change the landscape of Sarawak” and ensure that Sarawak will be the KINGMAKER.

*DREAM BIG and dont just leave it on the shelves (picture illustration) for all to see.

LET US ALL IN SARAWAK REMEMBER WE WILL STAND TO LOSE IF WE DO NOT USE OUR LEVERAGE AS KINGMAKER TO THE FULLEST.

GE14 IS VERY SIGNIFICANT FOR SARAWAK

Tan Sri William Mawan is a man who keeps to his words especially when it concerns the loyalty to Barisan Nasional.

In his statement he thank everyone for their undivided support shown to him in carrying out his duties as a Parliamentarian chosen by the people of Saratok. 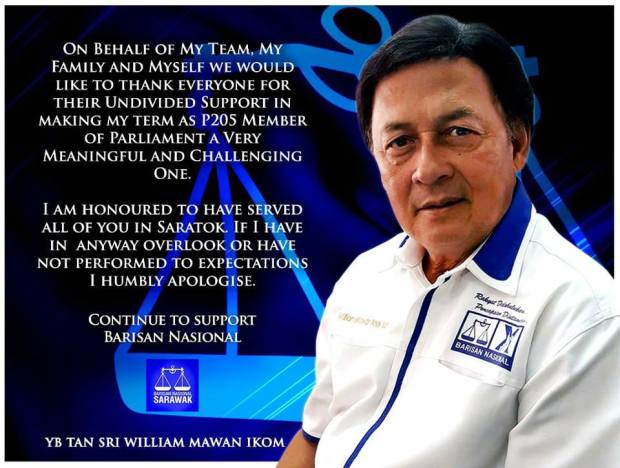 Stampin is not only a battleground for 2 ADUNS from both political divide DAP and SUPP but it is also a seat where the winner will have more to gain. Of course, ceramahs will not be the indicator for the votes but more on what and how much is being “TUI..(wager) 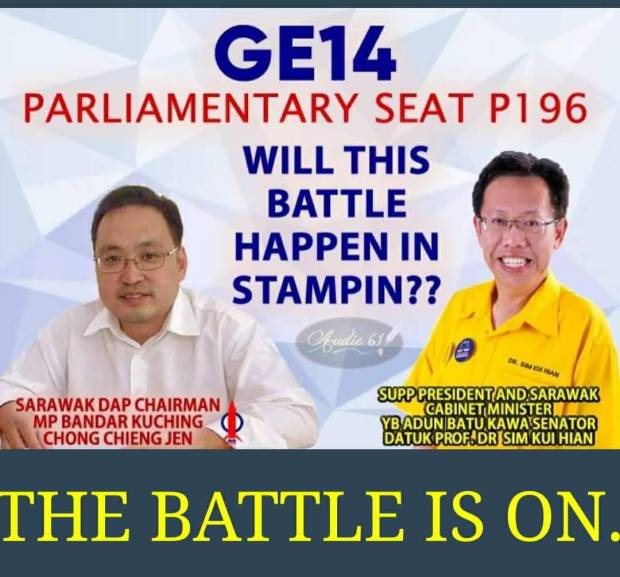 Who will come on tops we will know after the voting is completed and counted on the night of 9th May 2018.

Where you go, I’ll go
Where you stay, I’ll stay
When you move, I’ll move
I will follow you…………

The Incumbent of Saratok P205 was in high spirits when he spoke to audie61 after his ‘minor health scare” during the SEJIWA SENADA Programme last weekend where he was dashed to Sarikei.

He was in Saratok welcoming the DCM and his entourage at the rest house but he was ‘conspicuously missing“as per news filtering from a local daily when the Chief Minister Abang jo arrived. 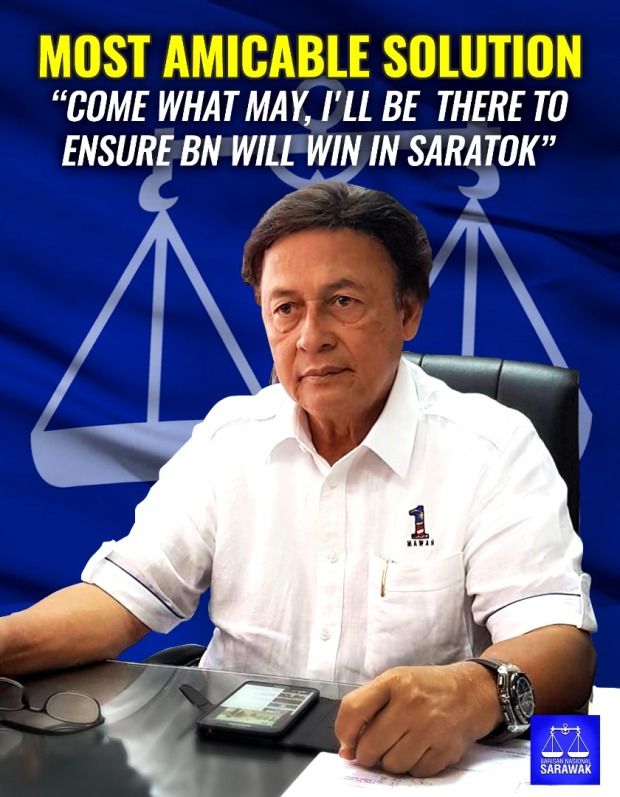 When we engaged further in our discussion he said,”Come what may, I will be there to ensure BN wins the seat for Saratok. There is a right to claim for PDP as traditionally the  seat belongs to the party but there are also questions being asked on the winnablility of the candidates being selected and put up by the party.” he said

The names of Subeng Mula and Dr.James Chella are names which are mentioned and submitted but they are not yet household names which the BN fears will be easily swallowed up by the might of PKR/Pakatan.

PBB is not claiming the seat through Mawan but BN sees the necessity as the candidates being mentioned are NOT FULLY PREPARED nor the machinery of PDP. There are in “sixes and sevens” eventhough PDP Senator did mentioned that with PBB support in Krian and Kalaka PDP would just pull through.

Would Barisan Nasional (BN) risk this?

Mawan himself quoted this,”the right of claim where one of them are not prepared isn’t it better to give it to the people who can retain the seat for BN.“

PBB would not want to lay claim as such but by putting up the winnable and unified candidate for BN and they would return the seat to PDP in due course.

Mawan has done his homework for the last 5 years and this has helped BN to get closer into the details of the demographics of the constituency. The incumbent knows who and where are the people who are supporting Barisan Nasional.

This must not be overlooked as if it is there will be problems a plenty for BN.

The indicators are pointing to the seat of PUNCAK BORNEO where PDP might just play its part to assist PBB whereby both seats will be retained by BN.

Nothing is concrete and it will be up to the top hierarchy to make that decision.

Winning and losing is so crucial for BN and the spirit of unity within the BN family would be tested to the fullest if it materialises.

It must be noted that PBB is not going out of its way to lay claim for the seat of Saratok and Mawan knows unless if an amicable solution is presented all parties would be satisfied with the outcome.

Mawan will be fully supportive of what the top hierarchy has laid out for BN and he will ensure that the Saratok seat remains a BN fortress.

Amidst the storm the Parliamentarian is as cool as a cucumber. The phones were ringing non stop and there were uncertainties the day this headline was published,” 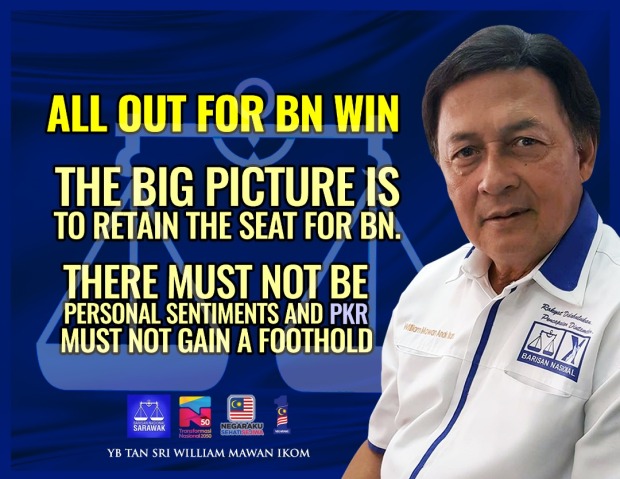 Was there any references to anyone ? What happens to the person who knows the secret of the deal? It does not look too healthy but more “bleak”for the supporters on the ground and without him at the helm various equations are surfacing says our source.

Even a Former Parti Keadilan Rakyat (PKR) Sarawak secretary, Idris Bohari is offering himself to contest as an independent candidate in Saratok parliamentary seat for the upcoming 14th General Election (GE14).

The Incumbent was contacted and he said,”The Big Picture is to retain the seat for BN. There must not be personal sentiments and PKR must not gain a foothold.“

He added that PDP Subeng might be inexperience but with time he might be moulded into the Barisan Nasional fold.

The development of Idris joining the fray is to take away the Malay votes and ensuring PKR have an easier passage in the game plan.

He has worked tirelessly from the day he won Saratok till the day of dissolution of GE14.
Saratok was also honoured by the Federal Government as the “Best in the State” in terms of providing assistance to the people which is in line with the vision of PM #dahulukanrakyat .

Mawan at the helm the government agencies are on their toes all the time.
He would appear EVEN at minor functions just to be with the people contrary to what many have said.

Mawan is also the President of Sarawak Dayak National Union.( SDNU)
PKR Ali Biju is well liked by the Krian constituents but being in the opposition he is unable to provide clear direction on development of his constituency.
Mawan himself is approachable by all walks of life irrespective of race, religion or colour and he makes things happen in Saratok. Subeng still inexperienced will have it very tough against a PKR Machinery which is hellbent on scoring big by capturing Saratok.
Mawan has consolidated all detractors within the constituency and the 4000 strong TERAS boys are solidly behind him to be retained.

PKR looks at Subeng of PDP as easy meat if fielded.

Mawan joined PBB to ensure the BN Picture is maintained. He could even have been a PRS parliamentarian if the offer was taken up after some approaches.

Indeed it would have a distorted picture when it unfurls and any political analyst would know there would be “fireworks” and “some unfriendliness” being exchanged at this crucial time between PDP and PRS.

When it matters most, Mawan remains a strong stumbling BLOCK to PKR quest for a FIRST PARLIAMENTARY IBAN SEAT for PKR.

BN would make the right choice for the right candidate to be fielded. Every seat matters for BN at this crucial time.

Call it whatever name be it Coffee Talk by SUPP or Kopitiam Talk by DAP it is still a political talk. It is a very effective way of reaching out to the voters to ensure that they vote for the candidates and the parties they represent who will contest in GE14. 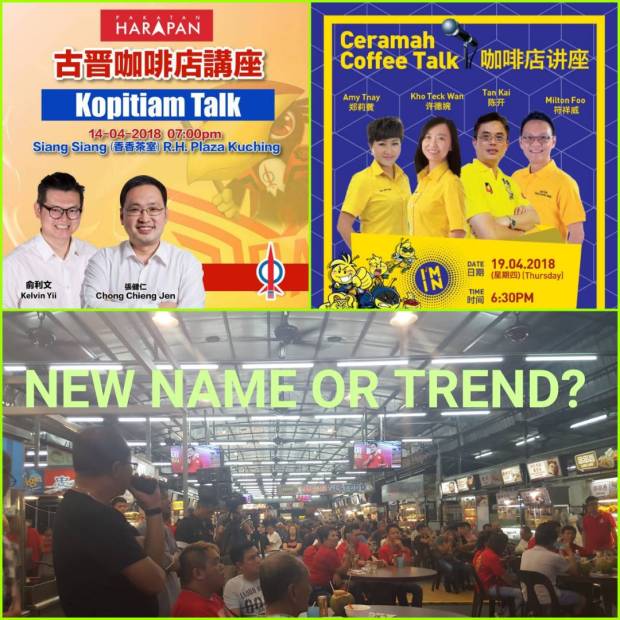 Even before the permitted time given by the ELECTION COMMISSION or permits given by the authorities concerned which is usually the campaigning time both sides of the political divide are already making their presence felt.