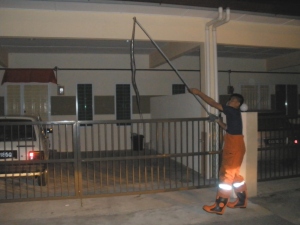 6.16 pm an emergency call was made to 999 by the owner of No.19 Primrose Taman Riveria that he has a close encounter with a very deadly reptile. The reptile “a cobra” measuring around a metre in length must have just had its feed as it rushed to the No.18 house to rests at the corner.

Neighbours upon hearing of a cobra rushed out in droves and soon the numbers swelled to almost 100 persons. No matter how dangerous the cobra might be, but still people as curious as they may be are not too worried of being bitten but as long as they are well informed to tell a tale. Sounds familiar to some ,”news does travel fasts ……”

Of course the excitement of making phone calls rests to some and the answers from the operators with regards to the response team were..”.They are out for dinner..They are on the way..Nobody is around …We will keep you inform”

999 being  a centralised hotline and the operator Salimah passed the line through to JPA. The above were the answers from JPA. True enough the bomba responded faster and after the incident only then did the JPA arrived ten minutes too late after the Bomba had done their days work and there was a thunderous applause. Hooray..!!

Phone calls were also made to both BN and DAP legislative assemblyman. YB Voon Lee Shan was quick to respond and both of them did their bests to call the authorities concerned. An incident like this can throw the whole  neighbourhood together and with 110 houses in the Primrose area in Riveria imagine what benefits it will be for a politician . Need we tell you more….

This Primrose area has seen three incidents so far with the Bees attacking the LAMPOSTS  three months ago ,dengue issue with Health authorities and Samarahan council where the whole area was intensely fogged, electricity issue very fresh with the Council,Sesco and Naim the developer. Read This( http://audie61.wordpress.com/2009/07/02/what-the-hell-is-wrong-with-our-mentalityblind-spot-and-t-a-t/

This Cobra has indeed turn up too early for XMAS but its a way for mosts of us to greet each other a Vey Merry and blessed Christmas. Thanks Bomba and JPA. However its up to the YBs concern to bring up this issue of a quick respond. The cobra was finally caught at 7.23pm.

The cobra did take an hour of our time to create and enhanced the neighbourhood to 1Primrose.Hmmmm..