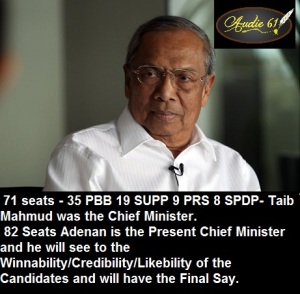 Much have been said about seat distribution. Only CM Sarawak and the BN hierarchy can settle it at the “Round Table”. There has been too much slagging and dirty linens thrown at each other between Barisan Component parties and their BN friendly counterparts. Certainly it does not look “HEALTHY” as sporadic infighting will only jeopardize the preparations.

The Bigger picture is getting a FRESH mandate for Barisan Nasional Sarawak under the New Man on top and that is Adenan Satem. The enemy is not within and a senior political leader have echoed this sentiment as he is doing his utmost to keep the “warring factions” on a leash or else all hell will break loose. This will be very detrimental to the Barisan Nasional  and the saying.”CRISIS means OPPORTUNITIES must not be ignored and it iwill be capitalised and cashed in by the Opposition Fronts.

Adenan will be RUTHLESS at the best of times when he needs to be and he will not let it get out of hand. He has been harping on “GIVE ME 5 MORE YEARS” which in itself is a double edged sword. He is after all the appointed Chief Minister until he has the FRESH MANDATE he is still under the rule of the thumb from the former boss.

This is the truth and nothing will stop Adenan from moving his Political Road Map to suit his next 5 years and the way his administration on how Sarawak will be governed.

Whatever and Whoever stands in his way as he battles through will be dropped or realigned. His inner circles will whisper sweet nothings to his ears but he will carefully go through the lists until he is certain of the peoples representative candidates who have the “Winnability/Credibility and Likebility” to win their respective seats. Remember Adenan was the Chief Hatchet Men under the former CM and as such he knows the way to SCORE A GOAL and win instead of kicking into an own goal.

It will be SETTLED sooner rather than later and Adenan will see to that. Believe Me and all the BN Component leaders will sleep easy soon as Adenan has the final jigsaw …