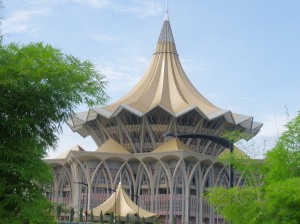 The talk of the town…….ONLY TWO THINGS….

1. The beauty of Taibs marriage    2. SNAP the willing partner.

For the last few months the incessant attack has been on Taibs properties abroad and his lavish lifestyle but it seems the “marriage” of Taib at 74 and his wife of 28 has diverted the talk. The masterstroke and an ingenious plan plus timely exquisite arrangements has open the eyes of many as what the man is all about rather than his accumulaton of wealth.Many leaders before him has failed to negotiate the trickiness of the situation but Taib has found a new ally in this marriage. He reamins steadfast that he will be returned to power and the Key to the DUN is his for now.

Many are also pointing the fingers to his capability of making it “two for the price of one” On one side its his beautiful marriage but on the other side is the marriage of former PBDS leaders towards SNAP. The remnants of a former force is more dangerous than an enemy which can be seen. Basically the person who can play the fullpart is someone who has always been a true blue loyalists.

Who holds the key to the safe? The person in question who wants anonimity is just a shadow for a bigger picture which will unfold if BN still remains in power after the next State elections. I was told by my direct links to Tedewin who himself confirmed to audie61 that there are three scenarios which are being played up on him.

I would not like to rewrite so a lazy way but capitalising on others who has put on a lot of good work which is a NORM  would be just to copy and paste.

DOES THIS ALL MAKE SENSE.??

No way. They want YOU to see it this way and as we focus on the “one man” We all forgot about the 50 and 80 people”Generals” who was present at the symposium. Whats the use of having 20000 people when the time is not right to mobilise when its just talk,plan and listen in a seminar room.

I will use the anlaogy of a small spark which will engulf into a fire which is more damaging than shouts of bravery,screaming and shouting till the voices are hoarse like the fans on the terraces of a football match. What spark up the breakup SNAP into PBDS and SPDP? What will be the spark that will engulf this 2011 elections?

People will forgive Taib but they will not forgive the person who is directing the operations willingly and obviously very arrogantly. Revealing the person here would be giving too much praise for the unknowing damages already done and bestowing too much respect for the greediness which has really caused ill hatred to the core to Taib himself. Taib in saving face himself is using SNAP and the beautiful marriage to ensure he remains at the helm.

SNAP remains the useful tool and as a tool the KEY OWNER to the safe is carefully choosing the right time to open up. Its justs an excuse by the new SNAP leaders to divert the attention of the “FINANCIER” so that those in the BN component parties will be complacent and will not know what hit them.Taib has sounded the WARNING and the YBs must know what he means.

We heard of the saying,”Better safe than sorry” and if BN leaders are not n sync with the top man they will suffer miserably and saying one thousand times “sorry” will be a little too late. YOU WILL WALK INTO THE SNAP CAGE  AND BE A PART OF THE COMBINATIONS TO THE SAFE.

The Key remains in a safe place until the time is right for locking it all up or opening a new window of OPPORTUNITY.

Taib is saying,”This is just the beginning of a new marriage…..

Are we all Confused….? Think Deeply now……

Natasha received a message from her former colleague telling her that “Tomorrow there might see some fireworks in PKR. Anwar will address a rally while Zaid will have a PC. Article will be up later.”

WILL IT BE SOMETHING SIGNIFICANT?

We reposts the article for the benefit of all:-

PKR de facto leader Anwar Ibrahim is scheduled to hold a rally at the Shah Alam City Council (MBSA) auditorium tomorrow where he is expected to speak on the latest developments in the party.

According to one of his aides, Anwar (right) is expected to touch on the need to close ranks, on the eve of the final round of voting by party divisions.

“The party has undergone a lot of criticism. I believe he will address this and the need for the party to strengthen itself,” said the aide.

Last week, PKR vice-president Azmin Ali announced that Anwar will be delivering a “special address” at tomorrow’s event to explain the latest developments within the party.

The party has been in a state of disquiet and assaulted by public criticism over the tussle for the party deputy presidency, involving Azmin, Mustaffa Kamil Ayub and Zaid Ibrahim.

Even before accepting nominations, Zaid has been accusing party leaders of conspiring against him and being a victim of their smear campaign.

After two weekends of polling Zaid was just a tad behind Azmin but declared his withdrawal from the contest because of widespread “malpractise and electoral fraud”, without formally writing in on the decision.

He also placed the blame for the situation on Anwar and Azmin and urged them to step down.

Zaid to explain resignation from PKR

Anwar had mostly stayed away from the fray until today, when he insinuated that Zaid had failed to serve the party despite the amount of special privileges heaped on him as a new member.

Zaid’s (left) theatrics have attracted strong criticism against the PKR which has repeatedly denied malpractices in the elections while urging detractors to back their allegations with proof.

Meanwhile, Zaid is scheduled to hold a press conference tomorrow at 10.30am at his residence to explain his decision to quit PKR.

Over the next few weeks, he is expected to hold a series of private meetings with supporters across the country.

Check this out……Is Zaid Ibrahim good for his words.

When he was sacked from UMNO on 2nd of December 2008 we gave him the song ,”What a wonderful world” Now the whole Malaysian political scene will not feel aggrieved but will happily sing him this song,”Let’s Kiss and Say Goodbye ”

Check all this out and read what they have to say:-

Zaid THIS IS FOR YOU..THANKS