Oh No, PAS President is at it again. What will happen to PAS in GE14 is anyone’s guess. 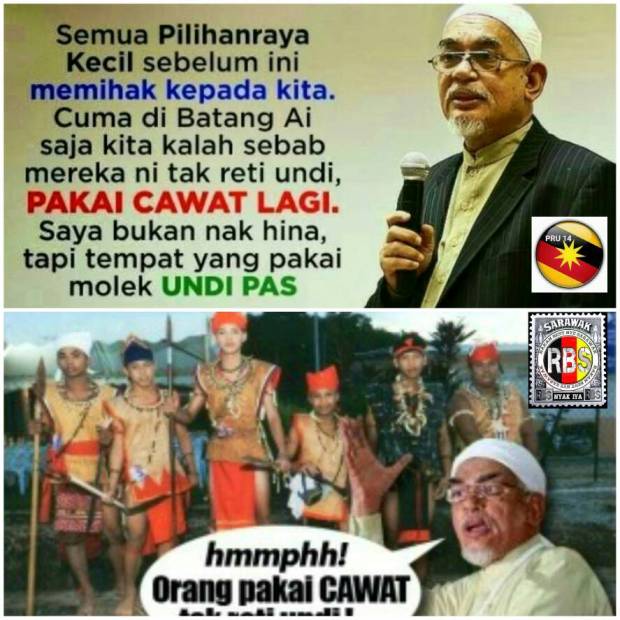 It does seem that he is at his best when his back is at the wall as he makes this political statement to try to coax Barisan Nasional leaders to accept him and the party into the BN fold.

Will Sarawak leaders accept him and the party with open arms? He has yet to make amends on his “CAWAT” INSINUATION way back in 2009.

Even MP Salang and PRS Secretary General said this,””He pointed out that Sarawakian   MPs objected to the bill because it is an opposition bill tabled by Parti Islam Se-Malaysia (PAS) president Datuk Seri Abdul Hadi Awang, who has few fans in the state.

“During the Batang Ai by-election in 2009, he said we were still wearing cawat. Later, he accused Christians of converting Muslims. Things like that do not speak well of him as a person and a leader. So when he tabled a bill like this, how can I be certain that he meant well?” said Salang.

This is extracted from Rakan Best Nye Page: “Apologise first PAS President Hadi. We in Sarawak always live in peace,harmony, eat,shop, no segregation and enjoy together.

We dont want PAS in Sarawak.
Don’t try to say this for your convenience. “PAS president Abdul Hadi Awang says Malaysians can learn from Sabah and Sarawak, where the two states’ diverse peoples have lived in harmony for so long.”

Is Hadi making the right calls or is he trying to get back the sympathy from the opposition front ,making PAS relevant while backstabbing the Barisan Nasional Coalition at the last minute?He has something up his sleeves and political parties within the BN are watching closely with hawks eye and waiting to  pounce.

Is there any truth what is being written in this report-we extracted “Unrestrained drinking, frequent fightings in public places and other activities have been cited” ( click below)?

An emeritus professor said that our Dayak Assemblyman should be at least be seen to do something if thats the word to be used to address the issue. They are put there,voted in by the people who have faith in them and if mosts of them lost their jobs in their thousands it will be a major social problem for the Sarawak State in the long run.

Even a former newspaper critic said,” Our Ministers must make an effort to find out the truth of the matter backed up with statistics. Can they justs take a Ban as a ban when it affects their own countryman?

A delegation with the Malaysian government to the Singapore republic would just draw more light to a rather touchy issue. This will have adverse effects on the manpower business between both countries.

The Silence is deafening but lets take that as a Starting Point to ensure that we will always lbe there for our people in their hour of need. We musts not take it as absolute truth until the ban is in totality for reasons which the country rejects our workers.

Efforts has been made by a political party from Sarawak and they have informed the Malaysian Home Minister and at press time the ministry has yet to meet their counterparts to resolve this issue.

When will we know..?

Will all our workers be victims of mindless some..?

Audie61 and the management team would like to take this opportunity to wish all our friends,supporters,allies,FELLOW SARAWAK BLOGGERS a very ‘ Happy Gawai Dayak ″ Gayu Guru Gerai Nyamai“

Its also a time for reflections and to move on to a more healthy lifestyle and  also to share the love of  the community spirit and togetherness to everyone.

audie61was trying ot avoid the obvious. Lets all charge full steam ahead and go for the jugular. Many smses and calls the whole day were received as those outside Sarawak could not read the locally printed STAR and it was also not reported on the STAR online media portal. We were trying not to spoil the few days of merrymaking and welcoming the Gawai Festival but it was getting OVEN BAKED.

There were also a number of calls from other BN members who chided James for this latest outburst especially in the STAR. What is he thinking of and what is he up to seems to be the common question. We are unable to get hold of him as he is in Australia as what the papers says but we leave it to you to make up your own  judgement.

Masing: I was only thinking of what is best for SPDP

PRS President James Masing is disappointed that his efforts at ensuring that the SPDP will not suffer a split ahead of their proposed merger has been misunderstood.
Masing speaking to the STAR yesterday from Australia dismissed William Mawans claims that he was interfering in the party’s affairs.He was also annoyed that Mawan has accused him of being ” unprofessional.”
If anything,I’ve been trying to keep their (SPDP) house in order.In fact Im helping Mawan out.When the SPDP five wanted to quit their party and wanted to be absorbed into PRS,I told them not to.”he said
Mawan had told reporters on Tuesday that Masing should not interfere in his party’s matters.
‘I need to say this once and for all” A lot of things he (Masing) has said he shouldn’t have.Thats not very professional.You manage your party and I manage mine,”said Mawan.
When asked about his working relationship with Mawan,Masing said he he had no problem with Mawan or other Dayak elected representatives in SPDP. however,he maintained that though he wanted the merger talks to be inclusive,it would be difficult to merge with SPDP if certain individuals were still in the party.
But if SPDP needs those personalities to be with them,thats their right.then the merger will take a backseat for a while,”Masing said
“I just don’t want any more talks that could lead to a further split in the dayak community.The parties have been going back and forth about the merger since 2006 but little progress has been made.
A politcal watcher even said this to audie61,” Why is James going 20 steps backwards and not 5 steps forward when the call for MULTI RACIAL PARTIES are the trend and not race based parties.
Why dont he even invite the other party dayaks in PBB,SUPP and others to join him..? If he can do that then he can claim to be the No,1 DAYAK leader..?

The Old Chapter where BN/PRS losts in the State Elections in 2006 will remain closed. Even if we dug deep now to give a full fresh intelligence report nothing will change. However events have sinced overtook the Incumbent Independant YB Gabriel Adit.

He was very instrumental in getting YB Jawah to join PRS under the Larry’s faction who later also joined PKR. Having failed to be with the PRS faction friendly to him  he too turned to PKR and was very instumental in creating a ‘WAVE OF FORMER PRS members to join him”

Many have stayed and found a new home with PKR but he himself  soon found out that PKR was not his cup of tea. Obviously the leadership of PKR wished him well when he joined the newly founded Parti Cinta Malaysia(PCM). Now the incumbent from PCM will be facing a BN/PRS candidate again in Alexander Vincent who losts in the last outing.

A holder of Masters of Science Alexander Vincent now 48 knows that the BN would not want him to be defeated but to WIN. Ever since his loss when he was touted as “GREENHORN“by the mass media then he has worked very hard on the ground to win back the support BN losts to YB Gabriel Adit.

Many political analyst has even mentioned then “It was actually a BN internal fight.He was caught in a CROSS-FIRE“

Adit has flipped flop in and out of BN as and when he politically needed to. He has thus far survived.  Meanwhile, Alexander has been seen on the ground according to the constituents/voters VERY FREQUENTLY at least once a week for the past 4 years.

Of course this is when his time permits and the 7849 voters will not begrudged him as he will come back stronger as his business stabilises. The voters will need an Assemblyman who not only will be the Ngemah N43 voice in the State but also one who will ensure that their ECONOMIC ASPIRATIONS of the constituency will be raised.

We were also informed by our reliable sources that a Dr.Jawa (retiring soon) is also pushing for a ticket under the BN. He has sinced joined PRS to be in with a shout and to be considered . On ground reports and other sources it is a choice between the two.

BN/PRS would not make a similar call by putting their hopes and trusts into a FRESH FACE. The Sarawak BN Chairman has been very happy with reports that eventhough Alexander losts in 2006 and now is being challenged he is still going round the constituency to wrestle the seat back for Barisan National. That in a way is a PLUS FACTOR.

BN will be rests assured this time round BN will not come out SHORT.ITS A NEW CHAPTER.

Besides PCM there is a high possibility that a local  will be fielded as a candidate from PKR. The PKR hierarchy remains tightlipped but they have identified a number of suitable candidates. Will Ngemah see a PCM versus BN/PRS and PR/PKR plus a few independants. It seems the Sibu p212 victory by DAP has seen many aspiring candidates joining the fray. No one wants to miss the boat for an office in the new DUN. 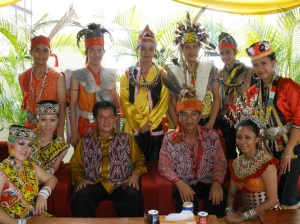 The battle will surely rage on and Aleaxnder Vincent hopes this June 1st 2010 Gawai meeting with audie61 crew will turn out to be a SILVER LINING. N43 is within grasps by BN/PRS and PCM/PKR will be wondering where and how they failed. PRS President James Masing has a nice headache on his hands and CM Taib will know that his medicine has already been delivered.

BN4 will now know that not only they have to contain with PR4 but also PCM. N43 will be a battle not for the faint hearted and there will only be one boat left with the INSCRIPTIONS YB N43 for the winner to board to the DUN.