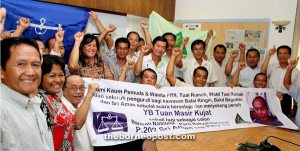 A former youth chief of a component party said to us,”It’s seems that one can enjoy success and power for only a while when they forget the people who assist them to get there.”

This article which appears at todays main stream media, “http://www.theborneopost.com/2012/06/12/grassroots-leaders-shut-their-doors-on-donald-lawan/. goes as far back as July 25th 2005. That particular afternoon the Supreme Council meeting turned into more or less into a “shouting match” and started the animosities which followed between two factions and the eventualities that followed which is history today . Soon it will be 7 years and …..

He said “What comes around goes around“

Isn’t it ironic that the people in the picture shown were once his very own supporters and they have now turned around against the very person they support.

The youth chief said the political lesson is simple “Its a double edge sword and ensure you keep your promises……. 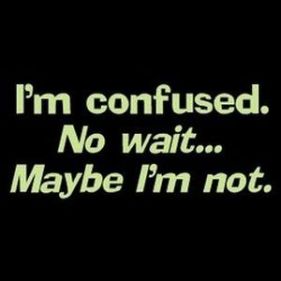 Todays headlines in the main stream media obviously is all about the Sarawak Workers Party helmed by Youth Advisor to the Chief Minister Larry Sng.  Our Rocket scientist Bugi Wijaya from Sabah in audie61 is now scratching his head as the political situation in the Sarawak he says has gone”murkier’ and thrown a spanner in the works in the very existence of BN4.

If you are not confused he said I am and and its really confusing as we can see from this statement and moreover its not so convincing.”

Larry, 33, maintained SWP would be a Barisan Nasional (BN)-friendly multi-racial party but would contest against PRS in its six seats of Lubok Antu, Sri Aman, Hulu Rajang, Kanowit, Julau and Selangau.

“We will be friendly to the rest of the state BN component parties and look forward to working with them. We are not against the policies, but we do feel that there are better candidates who are willing to serve the people and we believe that we have that kind of candidates under SWP”

BN3 out of BN4 we are friendly but the other is my enemy as we are attacking PRS. If i was to extract this from a FB posting from a fellow BN component party member I should think we may manage to get through the day unscathed and more or less does not need to enlist in a mental instituion of some sort or to take “depression pills”

Those two phrases”BN-friendly but fighting the BN/PRS in their constituencies” and friendly to the other component BN parties.. SUCH CONFUSION …….Oh Boy!

Its more or less like telling us the opposition in Pakatan you are now fighting one true BN and the other BN friendly party says an opposition member. BN tries to confuse us but we will still be fielding our own  candidates and we will try to wrestle the seats from the infighting that is in existence in BN.

Whats more the statement from Wong Judat will give us an indication of whats to come. This appeared in the STAR”Wong Judat Meluan assemblyman from SPDP who was invited tothe event,launched an attack on Entulu and asked voters to vote him out. He also told the reporters that Joseph Salang was not interested in reconciling with him after SPDP President William Mawan called for them both to make up.

He(Salang) did not attend a proposed meeting between himself and I. This showed that he was against reconciling.”he said.

The opposition member who wants to remain anonymous has this parting words,”

ARE YOU NOW CONVINCED THAT ALL IS NOT WELL IN BN PARTIES AND PAKATAN MIGHT MAKE A BREAKTHROUGH.

CAN OR NOT SAYS OUR FRIEND IN FB?

These are his words,”‎”WAHAI ANAK BUMIPUTRA SARAWAK”, WE MUST STAY UNITED UNDER SARAWAK BN COALITION. WHEN WE SPLIT UP, THE MORE WEAK WE BECOME…WE MUST STOP THE SPLITTING UP OF OUR PEOPLE! THIS IS WHAT OUR ENEMIES WANT US TO DO… DIVIDED WE ARE NO THREAT TO ANYONE, BUT AS A UNITED PEOPLE WE ARE A FORCE TO BE RESPECTED AND HONORED… Maybe to some feared… HIDUP ANAK SARAWAK!

SO ARE YOU CONFUSED OR CONVINCED..??

(..We know the whole truth, and nothing but the truth so help me God…)

We have often seen in the news about military personnels “killed in action by friendly fire” More often than not the enemy escapes unscathed and unhurt and live to fight another day. The intel given by forces on the ground did more damage than good. This GE13 Malaysia there will be, it seems “personnel fights within the BN” as far as Sarawak parliamentary seats are concerned.

BN engaging with BN friendly will give extra “HOPE” for the Pakatan strategic team to work on. The Pakatan team will be looking from the high ground and they will concentrate on the spillovers of the fight within BN to further strengthen their cause. We can write a number of thesis and have it submitted but often have we not question the WHY its been done?

There are obviously one thousand and 1 answers and you will have one answer already. We have heard too , the hearsays and the whatnots which spilled over at the carpets of the corridors of power. Many will not even leave their DEAR LIFE TO SAY THATS THE TRUTH.

The point of matter is with regards to SWP(Sarawak workers Party) and GE5 (BN Club) remnants of former PRS and SPDP engaging head on not only with the BN4 coalition in Sarawak but 1BN Malaysia made up of other BN partners. GE5 says if their candidate is not nominated they will stay out and support BN.

We were fortunate to sit down with PRS YB Alex Vincent (Ngemah)  and SWP Protem Deputy Chairman YB George Lagong (Pelagus) and also PBB YB Len Talif (Belawai) at lunch during the recent DUN sitting. What was interesting was the question that was put to George Lagong?

“BN friendly but SWP is going against BN in PRS held seats? How can that be termed friendly when on one hand you are considered BN friendly but when election comes you fight us. Shouldn’t you be fighting the DAP or Pakatan?”

Surely, this will be a major talking point in the run up to the GE13 says a political observer who was also at the table.

True enough, todays STAR news “let’s Tango,says Entulu” PRS deputy President was quoted” Come,face me in Selangau if you dare”he challenged Sng,the prime mover of SWP.He even said,”I will be sad if (Sng) doesn’t show up in Selangau as a candidate on nomination day.

Entulu even welcomed the candidacyof Sng’s son Larry or daughter,if Sng senior felt that they couldbeat him in Selangau. Sng would not be drawn into a war of words against Entulu but said that they SWP will field a candidate against Entulu.

WE CALL THIS BN-FRIENDLY..??

What is friendly are the words which SPDP President has uttered which has caught the headlines. I’m sure you will agree with us these words are more BN tuned and in the spirit of a coalition which Taib and Najib would be praising the SPDP president.

Spdp President Mawan said SPDP and PRS are friends and partners in BN,”We are not enemies.Our enemies are the opposition parties” He pointed out that the recent disagreement between Salang and Wong Judat was only personal differences and it was not fair to drag the party and accuse the whole party that it is against PRS in Julau.

As much as BN thinks that this tactic would benefit the coalition the Pakatan knows already the tried and tested formula. BN wants to openly bring in and lure the fish to the net says a Pakatan spokesman but we are ready to challenge BN in all the 31 Parliamentary seats. They will not be one seat returned unopposed says the spokesman. The BN friendly fight doesn’t work anymore as we are ready to face headon Pakatan v BN.

A political observer said,”Entulu should also throw down the chalenge to Pakatan instead of justs SWP. The enemy is outside but it seems now it has come back to haunt PRS from inside. However a win for SWP isn’t it also a win for BN? It’s BN friendly.?”

We would not like to drawn into the mix of it all and as far as audie61 is concerned we know,”

“ANY LOSS IS A LOSS FOR BN”

Two years ago we wrote this,”This is a favourite phrase”mushrooming of parties especially elections are near“in reference to “Peace Party” on June 14 2010. After the approval of SWP(Sarawak Workers Party) there are strong indications that People’s Alliance for Justice and Peace Party (Peace Party)has also been approved by the ROS Malaysia.

These two parties are approved eventhough they are about 4 others who submitted and the only reason is that”The Political Master finds them a most valuable asset for the coming GE13 and they find the two persons fronting the parties daring and are mosts comfortable in territories where others dont even dare to venture.”

This could be in line with putting pressure to CM who had indicated to PM and DPM that he will call it a day after the State elections. According to a veteran journalists the Federal Leaders have not forgotten the words spoken by CM Taib in a function in Serian. Peace Party is headed by Julian Petrus Jout (former PBB) and the party is strongly aligned to BN.

According to State Parti Keadilan Rakyat (PKR) vice-chairman See Chee How who is also Batu Lintang assemblyman through a telephone conversation he said the smaller parties will not have much effect on the outcome of the elections but it could also mean the floodgates would open for other BN Peninsular based parties especially so UMNO.

See Chee How continued and gave us approval to write this down,”UMNO because of its racists politics has no place in Sarawak” He also does not want to see UMNO in Sarawak for whatever reasons they can come out with.

The modus operandi of the mushrooming of parties in Sarawak can be similar to a trend which saw to the maiden entrance of UMNO to Sabah in the 1990s. The second echelon leaders in UMNO have already made their moves unintentionally but a number of local politicians have already seen the threat as real.

UMNO, we leave it to another day says former PRS strongman Tedewin Ngumbang. You justs look at the approval of SWP its a clear case of BULLY towards PRS.He said,” Isn’t PRS BN and SWP is approved BN-friendly and it will undermine the BN spirit in the state.

UMNO being the dominant party in Malaysian politics after 50 years very much wants their jigsaw puzzle completed with Sarawak missing says a political analysts.Its 31 divisions for anyone who aspires to helm UMNO Malaysia.

The Sarawak Carrot which is Dangling so Deliciously musts be taken seriously.

The online Bernama story (below) have also made a number of politicians making their intentions known and they called audie61.

The state Barisan Nasional (BN) chairman, who seemed nonchalant, said the registration of yet another political party was part of the political scene in Sarawak, where the people had embraced democracy.

“One more party coming in, why not? They are free to be there,” he told reporters after officiating at the opening of the 50th Multi District Lions Convention.

SPOT ON:- THE RAKYAT’S GOT CHOICES…