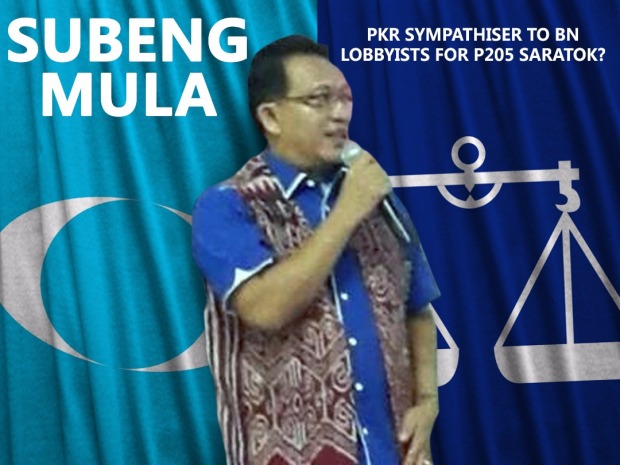 Let’s not be mean ,”wolf in sheep’s skin?”. However in this day and age politics is such that one have to be judgemental and ensure that the worthy candidate fits the bill to stand as a candidate. Our sources have informed us that there were once closely associated with and have close ties with PKR the opposition camp in Saratok.

Do we need to be robot scientist to work out this out?

Surely, PDP hierarchy must have checked the background of all 3 lobbyists to be a candidate for Barisan Nasional ? A senior PDP even have to answer to a netcitizen claim which in itself does hold some political truth on the matter.  http://www.theborneopost.com/2017/07/12/igai-denies-saratok-aspirants-members-of-opposition-party/

On another note an Emeritus Professor said,”As a political party PDP seems to be “Deliberately Blinded” to create some political inconvenience so as to ensure that the seat belongs to PDP and not to other coalition partners or individuals.

The MP Incumbent is a former President of SPDP and he is still very much a BN Member of Parliament. He remains true to the concept of BN and has never wavered from his stand which the PM and DPM acknowledges as plus points for a candidade for BN in GE14.

Mawan himself  is consistent with his desire to step down at the end of the next parliamentary term. He even said that he as not interested in any position in the party he once led.

Do we need to polish it up more and add pepper plus other spices to it?

Meanwhile the President of PDP Tiong King Sing knows too well that he has a trump card if the need arises. Has he been playing with fire? Ali Biju PKR Assemblyman for Krian is so entrenched in the state seat and he will not have any hesitation to face off with anyone besides the Incumbent. This is extracted from Ali Biju’s twitter,“Official Twitter account for Ali Biju, PKR assemblyman for N.34 Krian and currently running for Parliament P.205 Saratok”

Let’s not deliberate further and its a known fact that there are many selfish individuals within PDP and President Tiong himself must stop this nonsensical lobbying for the sympathisers of PKR to have an upperhand in P205 for GE14.

The 4 Incumbents MP s in Tiong,Mawan,Anyi,Nogeh are all very winnable for BN. Mawan himself knows that its going to be a tough outing for BN in GE14 and has always practised the Principle of No.1 Party is BN System of Governance and N0.2 would be the party that he is in.

He does not hide behind the sheep skin and he has always put BN’s interest above self and he would not tarnish the image of BN in whatever manner. He has Saratok’s continuity in his heart and he plans to see it out till the end of the term for GE14.

Subeng with his 32 years of experience in corporate administration and management should wait for his chance to prove to the BN leadership and stay as an intern to Mawan and ready for GE15. The experience and youthful partnership which Mawan and Tiong has will benefit BN in totality and if Subeng Mula is willing to wait for the chance he will stand to handsomely impart from the tutelage of the incumbent MP with his years of experience.

Tiong would be seen as an outstanding President in the eyes of the Barisan leadership in the State and in Federal. He must be seen to have uncovered an unpolished diamond.  Mawan would also be instrumental to bring together the rival factions for the benefit of the constituency of Saratok.

Krian was lost to PKR and the defeated BN candidates of Peter Nyarok in 2011 and Kilat Beriak in 2016 was due to disunity in its rank and file. This was even highlighted by the local daily,”The reason Barisan Nasional (BN) lost in the Krian constituency in the previous two state elections was disunity within the ruling coalition which led to sabotage from among its own rank and not because it failed to deliver its promises as claimed by the opposition.”

One in the end has to prove his worth to BN and Subeng Mula knows very well that the BN leadership on this occasion of GE14 would only pick the winnable and loyal candidate. He stands a very good chance to be an MP after Mawan calls it a day in GE15 and only have to put up a BRAVE FACE and let BN find a ‘common ground” to win this seat instead of handing the seat on a platter to the opposition in PKR.

The wolf in sheep skin tag would be wiped clean of the slate if Subeng knows that politics is not only for today but its an ongoing process. Experience and wisdom is a forte in politics and Mawan would be most willing to share one of his favourite quote,”No leader should put troops into the field merely to gratify his own spleen; no leader should fight a battle simply out of pique. But a kingdom that has once been destroyed can never come again into being; nor can the dead ever be brought back to life. Hence the enlightened leader is heedful, and the good leader full of caution.
– Sun Tzu

BN Top Leadership would be very cautious and the winnable seats would not be sacrificed for any party or any individuals selfish needs.

Be it by phone call or smses or whatsapp a threat by anyone should not be taken lightly. The person directed at will be emotionally aggravated and he will be subjected to political stress. This is the life where many in the political field are facing and we cannot blame them for having “security” surrounding them. Political foes can get very EMOTIONAL and they will unleashed all their political muscle to achieve their aims.

We do feel ever so sorry for many political boys but that’s the PATH they choose. Will Churchill Edward be able to withstand the pressure and stress after what he has spoken to the press.?

We wouldn’t dare to say yes or no…

Read the article below:-

Those questioning the re-admission of the four assemblymen into SPDP may have an ulterior motive, according to party’s deputy information chief Churchill Edward. He says these dissenting voices were in the party’s supreme council that unanimously agreed to the re-admission not once but twice — on Feb 23 and March 6. KUCHING: The decision to re-admit the four sacked assemblymen into SPDP was a unanimous decision by the party’s supreme council.

Its deputy information chief Churchill Edward Drem in a statement said it was totally wrong to say their admission was done solely by party president Tan Sri William Mawan.

“During that meeting, the supreme council members had reaffirmed their earlier decision to re-admit the G4 before the Chief Minister,” he pointed out.

Churchill, who is also Muara Tuang SPDP secretary, issued the statement to rebut the call by “anonymous group” calling for Mawan to explain why and how he re-admitted the sacked assemblymen into the party.

According to Churchill, the supreme council members kept silent when asked, first by Mawan and secondly by Adenan, whether there was any objection.

Following the unanimous decision, Adenan then witnessed the official re-admission of the four as SPDP ordinary members at another meeting at his office on March 19, he added.

Churchill said almost all the supreme council members were present at the Chief Minister’s Office to re-affirm their decision.

“All of them also clapped their hands as sign of approval at the end of the session with the Chief Minister.”

“In fact, the anonymous group also owes party members an explanation on why they demanded the president to explain what had been decided by the supreme council,” he suggested.

Churchill also said that Mawan had duly explained the re-admission issue to party members through subsequent forums including his chairman’s address during the supreme council meeting on Feb 23.

“I find (the demand by the anonymous group) illogical, ridiculous and an attempt to embarrass the party, the president and Chief Minister.

“I also think they are probably having an ulterior agenda as I could not see any other reason for their persistence in demanding the president to explain what had already been explained.”

Churchill also questioned the group’s motive in calling for an extraordinary general meeting (EGM) just for the president to explain the re-admission when they (members of the anonymous group) were probably part of the supreme council that made the decision.

With the Feb 23 supreme council and quorum being established as proper, it was beyond reasonable doubt that the re-admission was fully endorsed by the supreme council, Churchill said.

“That was why we all went to meet the Chief Minister to re-affirm and re-confirm that there was indeed a discussion on the reconciliation issue.

“We were not there to bluff the Chief Minister. If they (dissenting group) said the president had acted alone, then why were all of them at the Chief Minister’s office on March 6 and also on March 19?” he said, adding that Mawan ought not respond to the anonymous group because its identity was suspect.

On a separate issue involving attempts to put a wedge between Mawan and his deputy Datuk Tiong King Sing, Churchill said he believed it would be futile because at the end of the day, both would remain as friends and comrades in SPDP and Barisan Nasional’s fold.