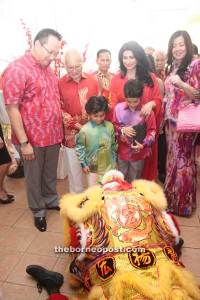 Traditionally the CM would have grace the event at SUPPs headquarters and join the well wishes to celebrate the lunar new year. For whatever reasons he has somewhat got a backlash from the many SUPP supporters of “trying to avoid” and making true of Asfia’s term of backing a winning horse which we blogged earlier. However the acting TYT was present at the SUPP’s open house which was very surprising.

It seems that two component parties are now not in a healthy state of mind and in SPDP and SUPP the Chief minister has time and time again avoided a clear indication of “HIDDEN HANDS” involved. He has even brought along SPDP President William Mawan on his CNY rounds which throws in more “headaches‘ for many political analyst.

This article by an internet blog clearly shows that there some truths that some PBB  overzealous leaders might justs have a say or two.http://sebanaku-sarawak.blogspot.com/2012/01/siapakah-mastermind-penghancuran.html

The ground is really shifting and the CM not only avoided SUPP’s open house but his remarks are seen as politically hurtful by virtue of making his rounds which was published in the main stream media” Among those the chief minister and his wife Datin Sri Ragad Kurdi visited were  Datuk Sim Swee Yong at his residence in Batu Kawa, Barry Tan at Metro Garden in  Jalan Hup Kee, Datuk Tiang Ming Sing at Jalan Tun Jugah, Datuk Kho Kak Beng at  Jalan Three Hills Park and Datuk JC Fong at Bampfylde Road.

CM Taib an astute and seasoned politician knows how to turn the tide which are very much against him. In an interview a few hours after the SUPP visit by Jabu and his entourage CM Taib said,‘I am too old to visit so many houses and he said he has sent Jabu to represent him at the open house.”

The blogsphere/sarawak coffee talk is full with whispers and laughters which is pointing now at SUPP to be a losing horse. It seems that CM is giving a direct answer but knows that he musts not be too deliberate but using Jabu as camouflage so as not to have a sour State/Federal relationship.

It will go on for days maybe even after CHAP GOH MEI but we all know that CM will have his lasts words/actions on the SUPP OPEN HOUSE.