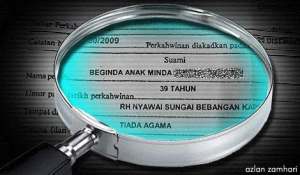 An old schoolmate from overseas called me and said,”What is really happening in Malaysia now? In our younger schooldays we used to eat together from different religious backgrounds in school canteens and there are no segregation. Are we going backwards or what? Next they will be HALAL Canteen Certificates  i presume for schools? Is it because of politics and the little napoleans that our children are now suffering the religious and disharmony that is in our schools? Its rather unfortunate and this has got to stop.

Do something was his final message. Can we..??

We have covered it in detail and there was also an apology from the senior assistant of St. Thomas’ Primary School, Iskander Fadeli. The full article can be read here .

Our earlier article :-https://audie61.wordpress.com/2010/11/07/caninga-public-outcry/. However that is not the question now. It is getting political and the can of worms might just start creeping out.

Now Independent MP Zulkifli Noordin wants the Home Ministry to investigate Beginda Minda @ Noor Azman, whose 10-year-old son was caned for bringing pork to a school in Sarawak, whom he now claims has dual identities – that of a Muslim and a non-Muslim. The full article can be read HERE…

audie61 called up Beginda Minda at 9.31am this morning and we needed him to clear a few grey areas. He said that the documents are with him and a certain Datuk Misnu from Majlis Islam Sarawak was the signatory in his letter. He even sms later at 10.01am ,”Yes 100 PERCENT BRO“

We honestly thought that events have overtaken us and did not want to pursue this matter until my schoolmate called 19.49 pm. This is something which each and everyone of us can play a part by telling the person next to us that we live in a multiracial,multiethnic,multi religious country and we must not compromise the PEACE and SECURITY of our country.

We are born here and we must TAKE CARE OF MALAYSIA. Religious extremism and fanatism must not rear its uglyhead or else this country will go to the DUMPS.

ITS UP TO YOU AND ME NOW…