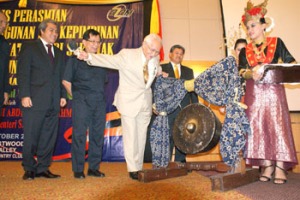 Friends can be enemies,enemies can be friends says our SPDP privilege source to audie61. He was giving us examples on how in politics Moggie (PBDS) went against Taib and also Salleh Jafaruddin (Permas)went against his own cousin Taib.

There is a bigger picture to all this he says and a veteran political analyst nodded in agreement,” Honestly could they be an engineered coup from within PBB just after the elections.? It can happen and Taib is very aware of all this.

Why should one be as CM has stayed in the chair for far too long says a political analysts. Day by day the pressure builds and every little movement is closely watched like the war drums and gongs being sounded. Its those little unhappiness which is giving the CM ‘headaches” as they are not within his control.

This was all started apparently pointing the fingers at ” some ” who have an agenda in PBB. Though during the height of the SPDP Separatists 5 it had the hallmarks of the CM Taib having affixed his signatures to make it more enticing and to see how,” Mawan comes out of it” { Mawan has come out of it with flying colours and CM Taib is very pleased with his whole showing in handling the situation. }

Without doubt, a few disgruntled and opportunistic politicians are masterminding to get into the ‘ inner circles’ and also to capitalise and profit if it materialises. Noises and whisperings to those who are interested seems to be the order of the day and recently it has even made it to some internet portals.

The Taib /Tiong Bests Friends Forever(BFF) seems to have made the movement more wary that the topman (Taib) is in the know. The plotters of this scheme are now looking over their shoulders and phone calls made have answers like,”No way,it is very close to election time and we have nothing to do with it.All using boss names only.”

When all it is dusted down many will be very surprised. If its speculations and rumour mongering the CM would not have asked his close aides to weed out the ” detractors and opportunists” from within.

It is a foregone conclusion and without question that the CM was and still very much so angered with the “kitchen issue” in London and his trusted officers are gathering all information to corner the main players. The people involved meanwhile are using other sources to “cover and create chaos” so that the CM would have to much to contain and thus just let it fizzle out.

The internet portals even mentioned that the rift between Mawan and Nansian is beyond repair. However our source in a telephone conversation at 11.55am begs to differ as the both the SPDP leaders were having a very cordial relationship and were chatting away like “before”when they were together in KL yesterday. The perception is all being played up and the bigger picture is that the political scheming by ‘some“has not stopped.

SPDP knows bests what it can do and the grassroots will not let the ‘Instigators” from trying to create “chaos” so that their “MASTERPLAN” will take shape. CM is not too worried about the opposition Pakatan camp but more from the forces within. He has full confidence to win the State elections for the BN but needs to be extra careful immediatedly just after the ” MAIN EVENT ”

What comes next is more a pressing matter for him and he certainly is losing some sleep over it. He has the inspiration to call for the State Elections and this is just an overture to ensure the schemers will fall for it.

DON”T BE SURPRISED…JUST WATCH THIS