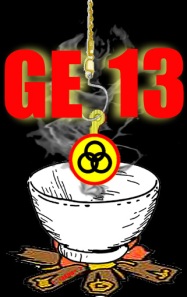 A SUPP Pemanca said to audie61 over breakfast this morning,”George Chans outburst which reads as-.”‘if DAP joined BN, it will be also useless like SUPP, MCA and Gerakan’ because BN does not care about the Chinese.” This will return and haunt our party SUPP and eventhough I am serving in a constituency where we don’t have a representative I do feel scared for our other candidates.

According to an observer “If GE falls in the month of November SUPP will have the same problems of being headed by the present leadership. The SUPP general assembly will only be held in the month of December which will not benefit the party. SUPP losts 13 out of 19 seats it contested in the recently concluded Sarawak State elections and this in the majority Chinese urban areas. In the coming Parliamentary elections 6 seats are urban areas and 1 semi-rural seat in P199. The observer says he does feel for SUPP and the Pemanca is obviously scared as he has received very “negative reports” from the ground.

The FEAR says the Pemanca is more or less like “you can feel it in the bones” We have spoken our pieces to the party hierarchy and they know the chinese majority of voters are teaching SUPP a lesson but we have to soldier on. We will still have to consolidate our forces and hope SUPP listens more than ever now to the voices of the people. The newspaper articles which has been read by thousands should be looked into immediately and SUPP needs to address the issues or else they would be more FIRE for SUPP after GE13.”

BN will be worried,wouldn’t they..??