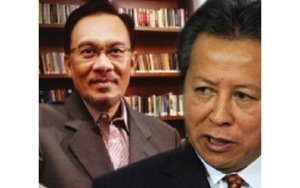 With the Intrusions of the Sulu Invaders in Lahad Datu many are questioning why he made references so directly and why not Tanya BN Sabah or Musa Aman instead of this ,” tanya sama Najib apa sebab goyang, nanti jawab Najib, Sabah nak hilang’.

audie61 says Yes,no doubt about it ” one can say its politics and its propaganda to entice the votes and to incept the peoples minds” We have been harping on this subject for sometime now telling people that any song written or sung has meaning and the lyrics sung by Anwar on Sabah has caught the imagination of some leaders in Parliament.

Earlier many just say its a song. I’m sure now a lot more people are realising that it’s more than the song and the lyrics.

We have now on the samewavelength none other than Anifah Aman, Federal Minister of Foreign Affairs and a Sabahan who questions,”What’s the meaning with references to my country being losts?”

Anwar should be singing BN Sabah will fall to Pakatan and not this “Sabah will fall and says Najib“. The lyrics needs much to be desired and Zulkifli Noordin MP of Kulim also question the message of the lyrics when he was interviewed by TV3 News.

ANWAR NEEDS TO CLARIFY THIS…..