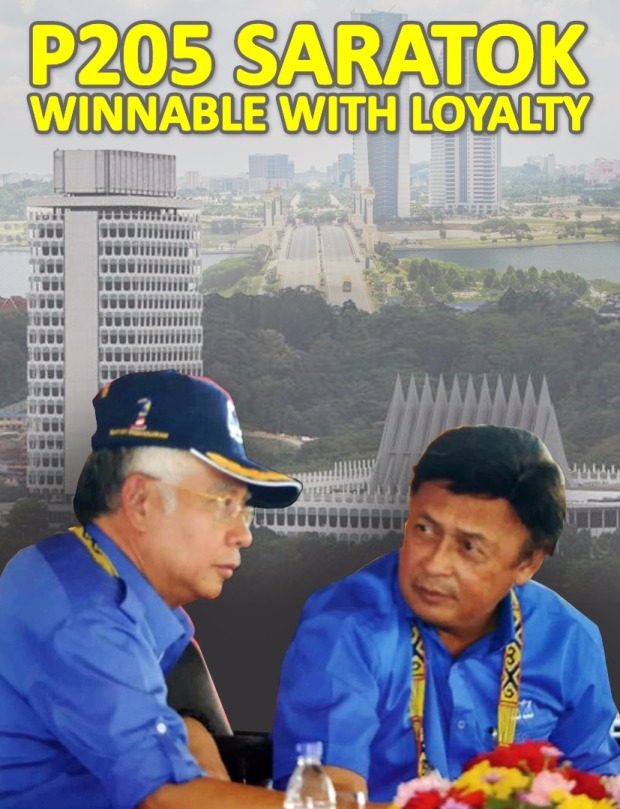 Is the Prime Minister Najib Razak going to abandon Tan Sri Mawan as the winnable candidate for P205 Saratok?

Truthfully, Strategically and Politically we don’t think so. One can say its just our opinion but in this interview with Mawan he tells us some “liitle secrets” which will infact more than tickle PDP.

PM Najib knows that Tan Sri Mawan in Saratok occupies the “High Ground” Najibs first rule as always is to occupy the heights which he has practised from the day he knows, reads and advised by those who also subsribe to this fundamental law of Sun Tzu which is” In battle and manoeuvring. all armies prefer high ground to low ground.”

Najib has the report and it was he in 2013 during GE13 who came to give full moral support as the Commander in Chief when all seems lost as PKR Ali Biju was gaining ground. It was not Ali Biju who was strong at that time but those SPDP members in the Jelaing’s and his group who turned against the party themselves. Mawan even remembers that he had to sought help from outside Saratok to fight and engage not only a common enemy in PKR but so called SPDP insiders within the party who were trying to dethrone the President to claim a memorable scalp for themselves.

Mawan himself quotes this,” There is no winnability without loyalty. Everyone claims to be winnable. Barisan Nasional will need to pick the most winnable. It is of course UNQUESTIONABLE  LOYALTY. We must quell all these aspiring and lobbyists as Barisan spirit must reign supreme.”

He continued without Prime Minister Najib Razak and he as the President then fighting for the party SPDP today Saratok will have fallen to PKR.

Where were the ones and the rests of them who stakes a claim for PDP today when he needs them most at the time?

The SG and MP Mas Gading Anthony Nogeh should thank Mawan for his political ascension to be a candidate as he fought very hard for him to be there in 2013. Did he forget that Tiki Laffe was the choice? Mawan not only pleaded with the top BN leadership and was shown the ‘cold eyes” by the top man. The SPDP machinery was mobilised by those loyal to Mawan and of course Nogeh was elected.

Politically as SG he should be more subtle by following his President Tiong King Sing’s words who even said he would leave it to PM and CM to pick the candidate. He would have done himself a world of good by saying,” Mawan is welcomed back with Open Arms” Instead he harped and agreed to YB Harry Jinep who is very much Junior in hierarchy by fully supporting that the Saratok seat should go to PDP as it is traditionally a PDP seat.

Mawan knows that they are many aspiring and suitable candidates but they are Stacking their claims in front of his eyes as he is the incumbent? Nogeh and Jinep are jabbing and throwing punches to see how “his chin” will take it? Mawan will go the full 15 rounds with them as he still subscribes to UNITY  in Barisan Nasional.

He continued which fittingly are excerpts from his book,”there may be internal party matters or possibly some misunderstanding between members of component parties. If left unchecked,these may give rise to ill-feelings and suspicion,which are not healthy to Barisan Nasional.

Indeed,we cannot afford to have rivalry,competition and suspicion,in whatever sheds or modes and at whatever levels among us,especially when we are committed to pooling our resources and strenghts as people of Barisan nasional to advance the cause of DEVELOPMENT and stave off the opposition from standing in the way between us and the rakyat.

Mawan will not throw punches to give a knockout punch to those aspiring to be candidate for P205 yet as he knows that those behind them have “old scores to settle”and he wants to guide them through when it is time for him to call it a day. GE14 will be a tough battle for the PM Najib and Mawan knows he will not let the PM down and will deliver the seat to BN.

PM Najib will know that Saratok is not an easy seat to contain with and he needs an experienced hand and not someone who is “new plus a greenhorn‘ to stake a claim from the Incumbent Mawan.

PDP can stake the claim but it will regrettably be lost for the party in the long run if Mawan is not given the “CERTIFICATE” to stand as a BN appointed candidate. Afterall, all the 222 candidates for the upcoming GE14 are standing on Barisan Nasional ticket and not on individual party basis.

Mawans parting shot in this interview short of saying,” UNITY AND CONSENSUS” is the way for PDP and he sees himself as the bridge that can be connected back for the greater good of Barisan Nasional.

Unquestionably  President Tiong also knows that Mawan is very LOYAL to BN and he is very much a Certified Winnable candidate for his party and for BN. PM Najib and CM Abang Jo will use their political wisdom to ensure that P205 will stay as a stronghold for BN and they will not need to look further than to stick on with the Incumbent.