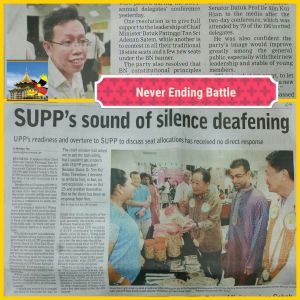 CM Adenan have already called both parties to sort out their differences?Who and Which party is now trying to play the “good guy” and the “bad guy”?Truth be told says a political analyst the Rakyat will still turn their backs on them as both are still at each other throat’s and its a”Never Ending Battle”.

The Rakyat have taken to Adenan’s style and approach in terms of his way of governance and no nonsense approach on state matters. He have won many fence sitters to believe in his ways but it does seem for his popularity to turn to votes for both the parties it will still be a herculean tasks.

As a blogger Bugi Wijaya puts it.”We are the New Media truthtellers” We are not for the money but we have what it takes to full blown the story or facts just for everyone to see. Believe it or not and if its good enough it will sell.” https://audie61.wordpress.com/2013/08/11/bloggerstruthtellersbloodsuckers-or-shit-stirrers-part-1/

Adenan, we know we are not missing anything but the two rival factions within the BN stable are. You don’t need a Harvard or an Oxford Political Scientist to tell you ,Sir…!!! The Truth hurts…