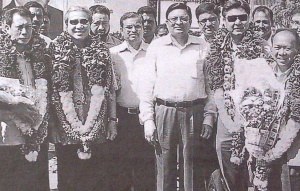 “Precious” is associated with Gollum in the Lord of the Rings trilogy. The 22nd Floor”Chair” is very much associated with the seat of the Chief Minister of Sarawak. The PBB convention this year 2013 depending on when the GE13 will be held will very much see an emergence of a “new and younger force of new leaders” if the overall plan succeeds.

The Awang Tengah’s Men have been brainwashed and this is how the INCEPTION works in the mind handed down to the young youthful recruits.It’s a Diversion which is seen getting ready for the crowning  of the 22nd Floor Chair.

“I will assist you in your actions everyway I can but for the people who get in the WAY OF THE BOSS GREAT plan,we will not forgive them.

No matter who they are,you will remember that won’t you?

If the little ones are not sacrificed,the major ones can’t be completed.This is the LAW OF NATURE taking its course in politics.

( By the way,do not attempt to translate into Bahasa Sarawak or Bahasa Malaysia. Then it will be OH MY ENGLISH AGAIN)

The ground movements did not start just last year. The pieces have been put together ever since the 1990’s when CM hinted that he will step down to make way for his successor. A lot of manoueverings and unfulfilled political ambitions has flowed down the bridge and many have been washed out into the sea and into the abyss. There have been too many names of past PBB leaders to mention here. They know too well.

Awang Tengahs men have seen it happened and they do not wished to be part of this FLUSHING SYSTEM. They have all and tried “carefully” to move their strategies ahead and they see a 78th Year old CM who will not have his ‘midas” touch left as one after another his trusted hands are being brought down.

We covered it by mentioning ” ‘sinister and outside forces” but the internet portal http://www.sarawakreport.org blew the lid wide open with the following which we extract “Many believe that he had heart disease because of natural sickness. But, in reality he was actually got serious illness because of xxxxxxx xxxxxxx’s magic. Many people in Sarawak know about it actually”

Is there a necessity for Awang Tengah’s men to follow through? Surely by ousting Adenan Satem the next person who will incur the wrath will be Abang Johari. The succession and the 22nd Floor Chair have indeed turned them into unknown”faceless enemies” and their determination to fulfill and see an end to ‘melanau rule” is overwhelming.

WHAT IS GOOD IS NOW NO GOOD AND IS NOW EVIL TO THE CORE..

We covered this subject in 2009 https://audie61.wordpress.com/2009/06/27/bewarebomohsfeng-shui-expertsshamansspin-doctors/

Today Awang Tengah’s Men are falling short because the evil plan has been hatched and the “BOMOH” ritual which was suppposedly to do healing has been used to move a darker,sinister,shadowy and occult like plot.

According to wikipedia the defination of “The bomoh’s original role was that of a healer[1] and their expertise was first and foremost an in-depth knowledge of medicinal herbs and tajul muluk or Malay geomancy.

However some use to summon spirits[ Spirits are said to be able to heal the sick, seek missing persons or even investigate reasons for bad luck. Spirits can also be used to attack people, cause sickness and misery and many other bad things.]

Has this been Used? Awang Tengah’s men knows better…

Awang Tengah’s men only cares about their BOSS rising to ther top.Usually its using the intentions of those around him. In the end,the ones that are sacrificed are the ones that is in the day.

Even their next rivals i.e. Abang Johari’s  men {ADUNS} are being approached with good intentions but when further pressed its a hint to move them towards their fold and to WEAKEN the association and to in doing so betraying. Two or more of the rivals ADUNS (names withheld for now) are being put through the process with the same modus operandi: and same script-

Earlier even amongst the majority Chinese based party SUPP there were pressured calls of CM relinquishing his posts before GE13 as the voters in the urban areas have blamed “PEK MOH” or “Pak Uban” for their losses. SUPP has 7 seats and two(2) are in DAP’s hands. They fear a whitewash and there musts be a sacrificial lamb. Its justs too easy to blame PEK MOH says a veteran SUPP Member who was jailed in the 70’s for his beliefs in SUPP.

He said” We should not blame CM Taib. He has done much for the State for nearly 40++ years. Has the Chinese been persecuted he said in terms of religion,education and economic wellbeing? Why should we use this for winning votes instead of getting on at the head of Barisan Nasional Sarawak who is the CM Taib.”

There will also be calls by some Awang Tengah’s men to have a rally blaming others for exposing them and they will use slogans”HIDUP TAIB” “KITA SOKONG CM TAIB” and the lists might go on. This will be the diversion which might justs be a little too late when all words spoken cannot be retrieved. Politics they say there are always room for forgiveness but the scar and hurt has been done.

CM has been reading a different book from Awang Tengah’s men and they are falling short because his eyes are watching and his ears are on the ground. The MIDAS Touch though slackening but the MOLES and BETRAYERS have better watch their backs. The leakages in the State administration is not something which musts be taken lightly says the inner circles to CM Taib.

Awang Tengah’s men might have been checked sooner rather than later but they are not about to give in so easily. They will use ways to cheat,allege and defame others but PBB will take care of their own.

Awang Tengah’s men knows that the OPPORTUNITIES are there eventhough DANGER lurks. Now with the Adenan Equation taken out slowly but surely so they think the attention is on Abang Johari.

The message is very Clear as the PBB AGM approaches. Their next enemy is the obvious and Abang Johari is keeping a watching brief says a close aide.

Abang Johari might be smiling says former group english newsmedia editor that its no more a three horse race but knowing Awang Tengah’s men they will only feel satisfied with their BOSS as the sole and rightful heir to the PRECIOUS CHAIR.

Falling Short..no way for Awang Tengah’s men even with CM having his eyes open and ears on the ground . They will Kill rather than to be Killed.

SAY THIS WITH FULL VENOM “PRECIOUS“[ horrible swallowing noise like Gollum in his throat“.

AND YOU KNOW WHAT’S IN AWANG TENGAH’S MEN MINDS…Abang Johari  we are coming after you..