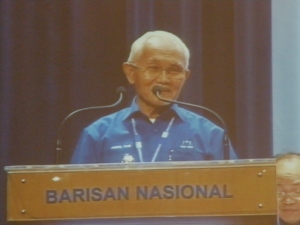 There was a lot of “hurrahs’ and ‘yeahs” when Larry Sng’s application to join BN direct candidate was turned down at the BN supreme Council Meeting. That was Yesterday as far as Taib Mahmud the CM was concerned. Yesterday Taib kept his lips to himself and he knows that the BN supreme council was not the avenue for him to be trapped.

Yesterday too the report was,”The decision not to accept him(Sng)was unanimous and his case was not even debated by all component parties “said the source. Many even questioned as to why Taib Kept quiet?

Simple,”just wait till we get back home to Sarawak guys”

Today:-meaning all “hell broke loose” even at the teh tarik and kolok mee stalls that Taib has given ‘lifeline” to the young man.The mass-media/newspapers throughout Sarawak published and Taib was quoted as saying ,”he plans to keep Assistant Minister Larry in the Chief minister’s office for some…