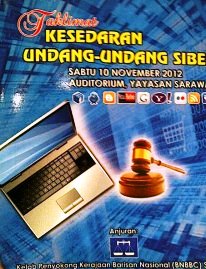 In 2008 Pakatan took the cyberspace and BN were hammered says one of the speakers a PBB Supreme Council member, lawyer and former Senator Idris Buang at the BNBBC Forum. Obviously what the legislators are doing should be commended but not all is rosy.

We look at the positives in that the “DOG-FIGHT” between Pakatan and BN cybertroopers and bloggers have reached feverpitched as the GE13 looms ever nearer. The agencies which were present is all well too as it ensures that they too are not left out in this awareness cyber law forum.

The other speakers in ACP Mohd.Kamarddin bin Mohd.Din who spoke on Police actions on cyberlaw and En.Zulkarnain Mohd Yassin (SKMM) -No censorship does not mean lawlessness. both made their points but the component party members were “MORE INTERESTED” on how to do battle against their opposition.

Laws will be laws and they are really a dry subject eventhough those connected with the law fraternity would think otherwise. The turnout was not very encouraging (less than 150) but it could have been much more impactful.

Participation would have been more fruitfull if the TARGET was for the right purpose. A participant even mentioned,” Its like HOCKEYPLAYERS playing Proffesional Football”. He meant well as he elaborated,” The Target should be political party branch/division members in and around Kuching areas. The same can be done in Sri Aman, Sibu,Bintulu,Miri and Limbang.

Simply by getting those who are cyber or facebooker friendly is not enough as the cyber warfare is all about PERCEPTION. The people involved musts be able to ensure the people who go into cyberspace are influenced by the arguments,opinions,discussion and articles which is presented on their screen.

Having said that,BNBBC have opened a can which is not of only full of worms as everyone wants a piece of cyber action and some are really in to “SS” Syiok Sendiri”and also making themselves ‘so important‘ that nothing can waver or touch them.

The whole idea of political parties getting and being involved in the cyberspace is as Idris Buang says “win the dog-fight’. Get the message across and ensure it sticks. get the Vote is what we want.

Facebookers or Bloggers must see the point of them getting involved or else why not justs enjoy gossiping about filmstars,food,travel or any other interests. This social media tool is being utilised by the Pakatan group to maximise and penetrate the right market and the next 3 months BN needs to step up or consign to another loss in cyberwarfare against Pakatan in 2013.

The heart,passion and loyalty to their own political party and Coalition should be the ultimate aim for the party cyber team. They are like the militaries version of elite forces and they know how to spin,engage and turn it round to the parties advantage. The FB troopers need what is delivered to them and “NUKE” it out onto the cyberspace screens or walls.

Ultimately,BNBBC should look more into the political parties instead of agencies who basically are paid staff and have families rice bowls to look after. The cyber teams of political parties in Sarawak are very much in place and they should be your TARGET.

Nurture them and ensure its a ‘special group” as we know youths,wanitas or SC members in political parties have other commitments in their constituencies especially during campaign and election period and they will not have time to stay behind computers or engaging back through their phones.

There are also no Volunteerism in political parties and as such any volunteer from political  youths will stay a figment of our own imagination. The leaders must not be fooled by how cyberspace war is perceived and how it can affect the voting trend and the political parties must accept that this MEDIA TOOL is the answer not only in URBAN areas but also the RURAL areas now.

The laws play a vital role to check its not misuse and they are in place to punish the cyber culprits. The heat is on and the fire is already lighted and many would not be happy and will feel hurt with what is the TRUTH.

BNBBC is showing the way but they are yet to hit their TARGET.