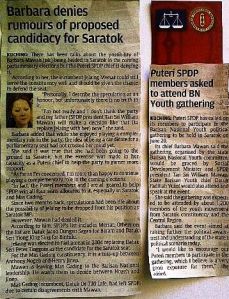 On August 17th 2011 we wrote this article,”PKR vs SPDP-Saratok “The battle rages on” We were told in so many words that the incumbent needs to be replaced if SPDP was to hang on our retain the seat from the grassroots,special branch,Jasa,to the military intelligence. SPDP President on May 5th 2012 said this to the main stream media,”SPDP most likely to offload Jelaing“

It will be one year from the period since we wrote on Saratok indepth,plus the SPECIAL REPORTS which have been circulating and we extract one of the words we used than,’ The groundswell is very much against Jelaing as his “Batang Hidung” is not even seen at any of the 3 Malay villages . The “malay” votes are important in this parliamentary seat and SPDP will not chance it again as the reports on the ground is anything but kind to the incumbent. (It has changed considerably from then and we are sure that our very harsh mention and realities have got wind to the Deputy Minister)

Various names have been thrown into the fray including Chambai Lindong,Jasmys Sadan Sagi,Dr,James Chella,Enturan Lupa and even some imported non party members names have been seen to make appearances in this constituency.

This article which appeared in todays mainstream media throws another possibility to the seemingly crowded “interested and winnable” candidacy of P205. Now the Puteri Chiefs name has been thrown into the “shark infested waters of political haggling and lobbying and many will be taking an opportunity to defame,slander her and accuse SPDP President of using his position to build his legacy.

Is it Wrong for William Mawan to even think of that.?

Maybe only Azmin Ali would think its wrong when he talked about legacies. PM Najib Razak is now looking at new talents to complement the existing popular YBs and MPs who stand very good chances of being acceptable by the rakyat. Its not so much BN is not popular anymore but as a former Johore MP and Minister  Sharir Samad puts it”The competitive edge and winnable candidate offered”

Times have evolved and change. Nowadays its not the symbol but PERSONALITIES. Politics nowadays is Borderless and Malaysian Parliamentarians are watched upon like “hawks eyes“by the international media.

The political parties have no choice but to listen to the ground”people want to choose the leaders who can deliver,work for them and speak for them in Parliament” The other criterias of humblensess,popularity,acceptance are secondary now.

Its not about Barbara Mawan here but given the party is facing an onslaught from PKR and the words which are unretractable which we publish again here it gives SPDP that chance.

WILL ALI BIJU STAND DOWN?

Extracted:-“Word has got to the ears of an aide close to the PKR assemblyman. He said,”any other persons nominated by SPDP our YB will not stand in the parliamentary seat but if SPDP was to renominate Jelaing or put in Nyarok, there is every chance that he will seriously have to reconsider.

PKR he said was very pleased with the assemblymans stand in his recent comments on rumours in circulation that ,”he was prepared to jump ship and also join SPDP. Furthermore he reiterated that “ he was a staunch Parti Keadilan Rakyat (PKR) man and that was where he would remain.”

There are so many factors for SPDP elections committe to consider and the words of Barbara Mawan,”am more willing to play a complimentary role in the party” is more than a political statement and we should not rule her out. Puteri UMNO is a Sabahan and now a Deputy Minister and Sarawakians should be proud too if SPDP Puteri does get her chance to prove her worth to be speaking for the many young women in Sarawak too in Parliament.

She herself knows that she will be entering”SHARK INFESTED WATERS” where every bite will be painful to swallow and her mental strength needs to be boosted up. audie61 should be amongst the first to inform the readers if she takes that road and embark on another journey of her life.

She has said it” Personally,I describe the speculation as an honour,but unfortunately there is no truth to it”

WE SHALL SEE WOULDN’T WE.??