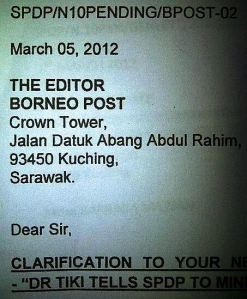 It seems the sacked SPDP5 are hellbent in creating troubles for SPDP and todays statement by Entri which appeared at the STAR looks like the right tonic to ruffle some feathers. Moreover MP Tiki Lafe is also standing by his statement which headlines,‘Dr.Tiki tells SPDP to mind its own business” which appeared at Borneoposts.

In it he blah, blah, blah but he seemed to and has incurred the wrath of SPDP Pending Information Chief Sutaghani Zaidoll in it where it was reported as,” Amongst the earliest to publicly call for the group formerly known as SPDP5 to quit their roles were SPDP Muara Tuang and Pending. “

Suta said,”it has snow balled to other divisions and SPDP grassroots are united as he send a clarification to the Editor of Borneo Posts,’Clarification on Dr.Tikis statement”

It reads,” We the SPDP Pending Division,would like to clarify that at our recent TGM did not deliberate or mentioned on any issues pertaining the SPDP5,as quoted by MAS Gading MP Datuk Dr.Tiki Lafe.

However,SPDP Pending Division did resolved to call for party president Tan Sri William Mawan to be returned unopposed in the triennial general meeting(TGM) later this month.

If the MP so require our minutes of meeting to confirm this,he can obtain the same from our office or the SPDP headquarters.

We hope he get the facts right before making any comments.

Suta went on to clarify that we stand as one united SPDP and will also stand behind what our other divisions have made if its for the better good of the party as a whole. The 5 musts have forgotten who have sacked them and its the recommendation of the disciplinary committee who made the call to the SC under article XV111 3 (iii). They should fight the sacking instead of trying to find faults with the divisions and the President.

In another related news this STAR article headlines “It’s SPDP who wants to ride piggy-back on BN not SPDP 5, says rep.”  drew flak from SPDP President in which he told the source,

“It’s (Entri’s statement) is utter rubbish.How can he (Entri) say we piggy ride on BN? We (SPDP) are BN“

The whole article is extracted here :-

MARUDI: Marudi assemblyman Datuk Sylvester Entri Muran is upset by an allegation that he and four other SPDP officials have been engaged in negative politicking while serving their constituents.

He said as the allegation was made by  SPDP president Tan Sri William Mawan Ikom, it had caused some party divisions to make it one of the most important agenda in their meetings.

He said at these meetings, some divisional leaders made resolutions to sack the G5 (formerly SPDP 5) from the Barisan Nasional and demanded that they relinquish their positions in the Government or Government-linked companies.

“The allegation against the G5 actually points to the accusers themselves. The G5  has never carried on negative politicking against SPDP while serving their constituents,” he said during a function at Rumah Justine, Sungai Entulang, Bakong near here yesterday.

The quarrel between them began last year when Mawan did not reappoint Entri as the party’s secretary-general.

On Nov 25 Entri was sacked. The other four were sacked later.

Entri said all along that they were discharging their governmental duties and responsibilities in their respective constituencies in accordance with the spirit and principles of Barisan.

“Under these circumstances, how could we be accused of riding piggy-back on Barisan?,” he said.

“Why should SPDP use the issue against us if it does not condone negative politicking within Barisan Nasional?

“Our positions in the Government are for us to serve our constituents and the people of Sarawak, and not our self-interest as alleged by SPDP,” he said.

He claimed Mawan uttered the accusation because SPDP was eyeing positions in the Government and Government-linked companies (GLCs) so as to ride piggy-back on Barisan.

He then accused Mawan of practising negative politicking to the extent that Infrastructure Development and Communications Minister Datuk Seri Michael Manyin had to hold a dinner in Bau recently to ensure that the people, particularly Barisan supporters, would remain united.