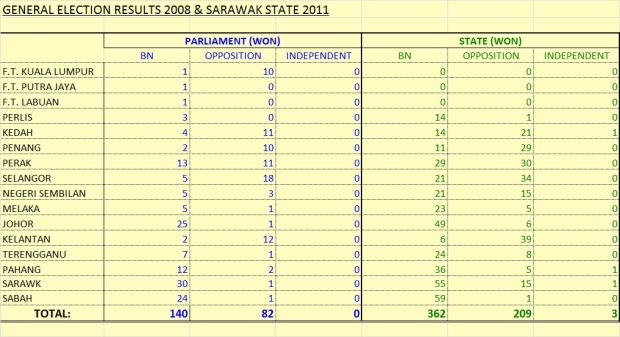 Today Mohd Hatta Ramli, election director for the opposition PAS :- “Although I think it (the election) can be as early as March, it could be dragged till June or July,”

An internet portal have this to say,”Prime Minister Najib Razak may call elections as early as March to stay ahead of a weakening economy and dissension within his own party.

However DAP Lim Kit Siang said,”Anwar’s acquittal is likely to affect Najib’s time-table for the holding of the next general elections as the possibility of dissolution of Parliament immediately after the Chinese New Year has receded into the back ground.

All political parties in Malaysia have been anticipating the dissolution from last year after the Sarawak State Elections in April 2011.  There are 725  seats to be contested and with Anwars acquittal yesterday, the opposition will surely not have any hesitation to have their respective State assemblies dissolved to coincide with the Parliamentary Elections.

WILL THEY COME UP WITH OTHER EXCUSES…???