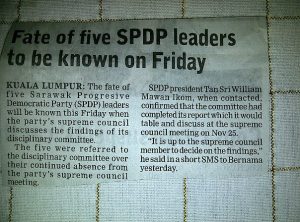 Whatever,Whoever is negotiating for the 5 separatists YBs from SPDP nothing else matters in a couple of days time.The road ahead will either be choppy or smooth sailing for the party.It will come down to the findings of the disciplinary committee. The committee will present it to the Supreme Council and it will be left to the members present this Friday 25th November to “move a motion” to take the necessary actions which are relevant.

Word coming from an insider source close to the SPDP5 is that there are already so much movements. bickering,distrusts and nothing changes. It seems there is a point of no return. The rumours of ‘new party” which have been speculated in the blogs and picked up by mainstream media might turn out to be true afterall.

WOULD THIS NOT BE REAL.?

Approaches have been also made to opposition party members to join the new entity by one of the SPDP5 Ybs. The new entity will be realised very soon as the BN YB is so sure or else there is “no point” in giving an invitation to a number of opposition YB to even consider.

The SPDP 5 has more or less accepted what is coming down on them on Friday the 25th of November and they are ready. They are moving about “arrogantly” says component party member as if they have done nothing wrong. The person who loooks very sad though is the President of SPDP William Mawan. He has to accept the findings of his members and it will be tough months ahead for the party and he needs all loyalists to stay focus and united.

The party will come out stronger if it manages to overcome the choppy seas and let those who have different agendas to move themselves out from the party. SPDP will overcome adversaries eventhough the SPDP5 are “Not Bothered.”