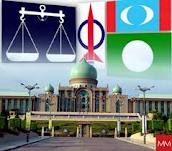 It’s been a  number of hectic days going into November with all the Catholic Christian days of Holiday of Obligations in All Saints and All Souls Day. Alas, I can now set my mind on something which was also been at the tip of my tongue. Lets shout it loud,”

Najib you need Sarawak and Sabah to deliver.

At ground zero in Peninsular BN will not have an easy ride no more like previous general elections. Pakatan is better prepared and moreover thare are one- two many issues which are not very “people friendly” and it might justs sway the fence sitters. No need for me to further elaborate here as it has ALREADY left some bad after taste on the general public as a whole.

“Shout…. Let it all Out” A song by UK band Tears for Fears can bests describe this article which I came across and extract this paragraph ,”If 18 out of the 20 seats now held by MCA, MIC and Gerakan falls to non-BN parties, then BN-Umno will be dependent on Sarawak and Sabah.
And if Sabah and Sarawak do not extend the lifeline to Umno and BN in Semenanjung, then the ruling coalition will find themselves on the opposition bench .”

The full article is written by a former Umno state assemblyman  and he is well versed on the current political situation. Click HERE for the full version.

It’s a good article but it could even be better if he has added this in. In the article he should have mentioned many thanks ,never mind a million thanks to the Sarawak and State BN leaders for keeping the Federal government intact until now.

The 916 Propaganda of 30 BN leaders hoping across is still very much fresh as far as Sarawak/Sabah leaders are concern. The Taiwan trip and the infighting which hampered UMNO must not be discounted until it saw to the fall of Abdullah Badawi.

I tweeted today something simple,”Today is remembrance day,”ALL Souls Day” we treasure the memories of those who have passed on and pray for those who are forgotten by others.”

When the writer said,”opposition bench” it strikes a note and I will remind those who are holding powers in the Federal government in that ,if you forget the two East Malaysian States it will be your downfall. You could be even out of a JOB the day after the elections…

PM NAJIB ARE YOU LISTENING..??