Where will Mahmud Abu Bekir Taib stand to be MP candidate for GE13? 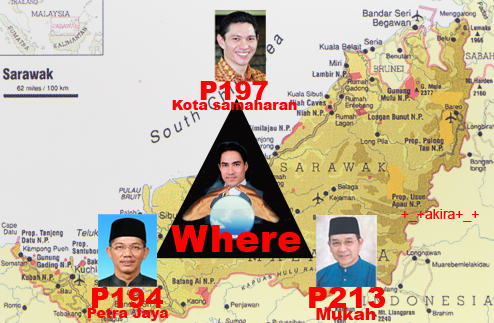 Surely no one would go against “the anointed one” The motion has been set and mosts leaders from PBB Bumiputra Wing who are aligned to CM are jumping on the bandwagon and giving their endorsement freely. The lists includes State Assembly Speaker Awang Asfia Awang Nassar, Senator Idris Buang,Minister in Chief Ministers Office Fatimah Abdullah,Chief Political Secretary to CM Karim Hamzah,Youth Information Chief Aziz Adenan and the latest being Second Minister of Planning and Resource Management Awang Tengah Ali Hassan.

The Chief Minister has already said he hopes that Bekir is ‘serious in serving the people” in response to his son Bekir’s statement of “I am always interested in Sarawak politics but no one has yet called me,” Last weekend Awang Tengah joined in by echoing his boss CMs words,”“I am very happy for him and I hope he is serious”.

A few murmurs from the political circles are coming out with their own analysis from a different perspective. It might not affect the choice but certainly its worth to hear their views.Mosts of them are in agreement that,”Its good the leaders are coming out to endorse but something is missing.”

In answering the first question there has been a tinge of disappointment in Samarahan Constituency for Bekir’s brother Sulaiman.The grassroots felt that that they were let down by Sulaiman eventhough they put so much hope on him. They felt now they needed somone else besides Sulaiman’s brother as the saying goes,”Once bitten twice shy”

Even Karim Hamzah told a reporter that each individual is different and that claims that he too will let them down is unfounded will not easily erase the ‘fear of another misjudgement” Bekir needs to consider this factor too as eventhough his brother in 2008 garnered 15559 votes against PKR candidate Hussain Abang Apok 4148 this time round it will not be so smooth sailing. One of the seats earmarked by PKR is also P197 Kota Samarahan and Baru Bian has already said this,”We have spoken to the people on the ground and so far the response is very encouraging.”

P213 Mukah the incumbent Muhammad Michael leo Toyad who is already in his seventh term has already made his stand by saying,”well,I have no wish to step down.I am still able to work at the moment also I am still working to develop my constituency,so I am ready to defend my seat. Bekir would know that the incumbent has twisted his words saying the above as on one hand the incumbent says… “its all depends on the party’s decision if I stay or not.”

Bekir too knows that that Leo Toyad who was once a Roman Catholic and now converted is not well received by his constituency,there has been calls of him being replaced by new faces and there are names being thrown around in Alphonsus Dorhat,James Pieng with others even before Bekir’s name emerged. There seems to be a very loud calling for a Christian Melanau assemblyman to serve this notably christian dominated constituency and in the lasts elections the signals were very apparent. Bekir will have his hands full as Leo Toyad would not give up his seat so easily.

The second question is the dayaks feels that the Melanaus are building their dynasty. If any of their leaders openly support not one of their own they will be scorn upon by their own community. It has been reverberating for some time now that the dayaks are hoping that one of their own take the helm and if endorsement is given to Bekir it will hamper any dayaks from getting the coveted chair. The dissenting voices speaks loudly,”Another thirty years no way..!!”

In keeping their distance the current crop of second echelon dayak leaders would know they will not be ‘singled out”by any group in the Bumiputera wing. There is already a known ‘power struggle’ amongst certain leaders and the grouping is getting clearer as the days goes by for the CM to finally call it a day. The dayaks are not only keeping out of endorsing”Bekir’ openly but avoiding being dragged into the skirmishes which are happening behind closed doors.

Thirdly,one parliamentary seat which Bekir looks as challenging to stand out on his own would be the P194 Petra Jaya seat. The incumbent a deputy minister is also the Youth chief of the party. Bekir knows this area very well as he has his house located in this constituency and he knows that there are at least 5000 and above opposition voters. PKR has already indicated that there are signs that they will be able to win this seat and wrestle it from PBB. This even makes it a stronger case for Bekir has he is known to “love challenges.” Even DAP MP and Adun Chong Chieng Jen has thrown a challenge to Taib Mahamud his dad that he should move away from safe seats to fight the opposition in urban or semi urban areas.

Bekir would like to win this seat handsomely and tell DAP and PKR that he managed without using his dads influence. His dads preference would be for him to stand in Kota Samarahan or Mukah. The people of Mukah yesterday called audie61 and said,”Toyad still wants it and nobody else but only Bekir can take it away from him.”

Bekir knows that he needs to be serious to please his dad and he would not just pick up P194. He has to wriggle out to prove his worth in the political field and a platform right in the middle of Kuching Division where the voters are semi urban and winning it would be the icing on the cake for him. Fadillah has kept quiet on this matter and he might just be thinking of “changing his seat” to maintain his parliamentarian status. Will he be given a “safe seat..?”

PKR Sarawak Women chief Nurhanim Moksen even mentioned in a telephone call to us that he finds the challenge of Bekir to be interesting and she says winning for PKR will not be so easily as Fadillah would have been easier to challenge. They know how to handle Fadillah as they have kept track of his movements and will use it as “atomic bombs” on him and oust him. PKR must be confident enough on this seat as it was unveiled recently that P194 is also amongst their winnable seat.

The Bekir factor will be a twist in PKR’s works and Bekir a “fresh face”succesful businessman and also with good political linkages would be able to win back the majority of the constituents to the BN fold. Many in this semi-urban enclave would be very happy to give him a chance to improve their Petra jaya constituency as they know he does thrive on challenges. Bekir knows the option of P194 stands out eventhough the safe seats of either P197 or P213 are as good as him being given on a “silver platter” an MP seat.