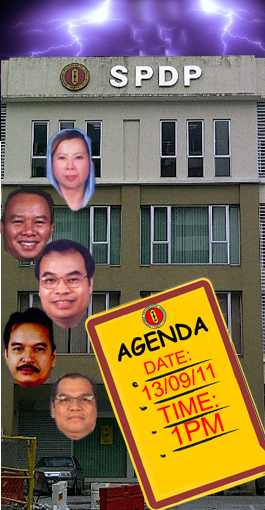 The agenda has been sent out to all members of the Supreme Council of SPDP via fax and registered posts by the Secretary General of the party. There will also be follow up phone calls by the administrative staff of the party a day to the supreme council. This is our normal procedure and it has always been practised by the party says an aide to the President of SPDP.

There is enough quorum for the meeting which is scheduled for 13th of September 2011 at 1 p.m at the party headquarters. Many will be asking what is in the agenda and our source reiterated to us as at audie61,”Usual and its the normal agenda in political meetings. ”

When pressed further he added,”Hopefully all SC members will be available,present in the meeting ,we will be able to deliberate matters for the better good of the party and the BN coalition as a whole. If some are missing we will cross the bridge when we come to it.”

A SPDP member mentioned to us  and said,” they should know the time and the place of the meeting too ” Just remind them its at Badruddin road and show them the picture.