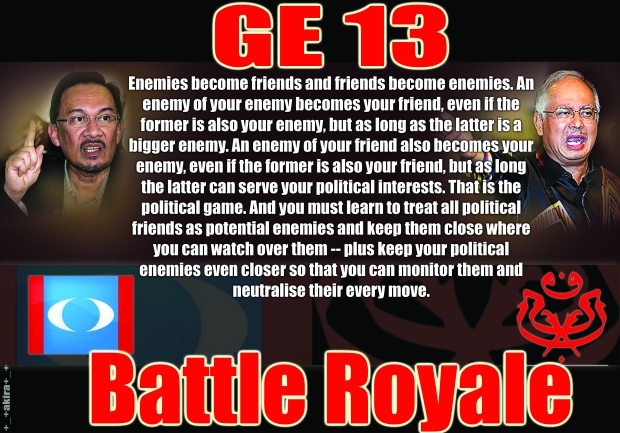 An insider source from CM Sarawak’s office told us that his boss mentioned to some of his very senior cabinet colleagues,”The next Parliamentary elections needs to be held soonest or it will be very bad for the BN administration. The pendulum is swinging and it might just go out of control. The SILENTmajority are watching very closely. The only thing that is helping BN for the moment is the vibrancy of the world economy and 2012/13 it might get worse and affect Malaysia drastically.Be prepared for the worse and hope that BN is returned to power in the GE and still runs the Federal adminstration. The GE13 needs to be called soon”

The Anwar factor will still decide many a mind to switch camps.

WHO IS WITH WHO WILL DECIDE WHO RUNS THE COUNTRY AFTER GE 13.

WAS THE CM SAYING ALL THIS TO CATCH THE EARLY MORNING BURGLAR BUT NOT THE MIDNIGHT THIEF? ?

A BATTLE ROYALE IS ON THE CARDS….