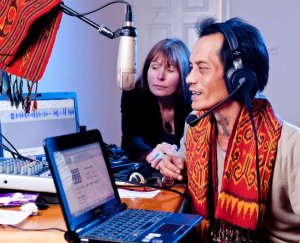 Has Sarawakian DJ Peter John aka Apai orang Utan left the UK based Radio Free Sarawak to be in Sabah? It is on everyones lips that he has seek greener pastures or apparently he has been”sacked” or asked to go willingly. Certainly one has to interview the man himself as our source says,” he is now in Malaysia and you can contact him.” Did we meet him..hmmm?

Well this is really getting the rumour mill up and about as last weekend Bugi Wijaya our Sabah correspondent sent us this story.

SAPP launches its alternative online radio so that listeners in Sabah will have an alternative radio (online) to provide clean, brave and truth on news and issues affecting Malaysia and Sabah in particular.  The launching with the theme Bersih, Berani, Benar is held in conjunction with BERSIH 2.0 and despite the intimidation of the police and the city hall enforcement unit.

The Radio Sabahtv.net as launched with the unveiling of the signboard at the party’s headquarters on 9th July, 2011 at 1:30 p.m. by President of SAPP, Datuk Yong Teck Lee. 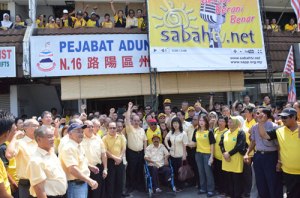 Yong, in his opening address through a recorded radio message said the event was spurred by Bersih 2.0 call for free and fair elections so the theme for its Radio SabahTv will be “BERSIH, BERANI, BENAR”. He said SAPP supports the 8 points of Bersih 2.0 and to stop the electoral corruption by the BN government.

Earlier in the wee hours of the morning, the police tried to questioned the SAPP Youth on the launching especially on the theme with the words BERSIH and the yellow backdrop.  They backed off after the arrival of assembly woman for Luyang Melanie Chia Chui Ket and her husband Edwin Liew.

There was a strong presence of the police force during the launching which caused the local present lamenting that they are the ones creating the jam in the area.

Najib’s fixed deposit State of Sabah is under real threat and it seems that many in UMNO hierarchy are pushing for a separate State elections first before the GE13. The radio station does have a big impact on the voters mindset and if DJ Apai Orang Utan is roped in to assist the local Sabahan DJs it will certainly create more than a stir/ripple but a whirlpool of uncertainties in Sabah.

Bugi says,”Yellow is the colour now which BN/UMNO is so afraid. It was once Green(associated with PAS) Orange (Hindraf)  and also Black (Teoh Beng Hock) The time has come for BN Sabah to stand out and be counted.It is indeed high time that the internet cyber team rolls into Sabah to assist the machinery which is still living in the past era of winning the hearts and minds of the voters. The truth hurts and if Sabah BN still think they can steamrolled the opposition they just have to look back at these two dates 308 and 416.”

Sabah Radio Station will Hurt YOU..Sabahans have seen the light.

IS BN STILL WAITING TO BE DETHRONED.??