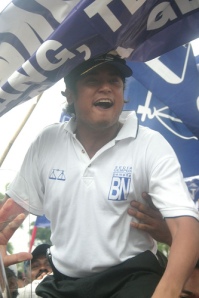 KJ seems to have ruffled a few feathers with his statement just immediatedly after the BN coalition has received a fresh mandate in his tweet. It was enough to draw a direct reaction from Aziz Adenan PBB Youth Information Chief on how KJ should justs “handcuffed his fingers” as he is an MP and UMNO youth Chief”. He should have left his BB in his pocket.

The result,”He has not taken into account the sensitiveness of stepping on SUPP’s shoes and maybe facing the wrath of the party as a whole.

We tweeted today against MCA Gan Ping Sieu Deputy Minister of Youth and Sports,”1st KJ made statement now MCA Gan parroting same tune on CM Taib.KEEP OUT AND STAY OUT. Pbb knows what to do.Both of you go help SUPP“

Tweet you are only afforded 140 words but this is the actual perception of what we intended to deliver across..

“What we meant is that if both of you KJ and Gan sincerely meant well stay in Sarawak for 3 months or more temporarily and see how you can assist SUPP in their hour of need or whether SUPP needs your help. A big question mark (?) here.

Don’t jump on the bandwagon and harp on the single subject of “Taib is the cause of the loss of Chinese seats.” Well what happens if MCA losses badly again and UMNO wins more you call for Najib to step aside too?

The main problem is within the party itself and all arrows should be directed towards the party SUPP.Why Taib..??

The Chinese electorate has a way of passing the message across to their leaders and they must realise that all is not rosy and well.

The Dewan Undangan speaker Wan Junaid Tuianku Jaafar also called detractors of CM Taib to leave him alone. He was asked on KJ views and he said,” He believed the transition of power must be planned properly and that the process for a new leader to take over was ‘now in progress.” The process of grooming the new CM has to go through the party(PBB) itself because our members need to know if he is the favourite (leader)

Views from the grassroots are also important to ensure that the succession plan can run smoothly.”

Wan Junidi said KJ had no right to speak or to give suggestions on this matter for two reasons.Firstly,he was ‘just an outsider” and secondly he did not have in depth knowledge of politics in the state.”

Now the political game gets murkier and there are rumblings on the ground that some BN YBs are working out a coup to detrone CM Taib as played out by a blogger rajahmas in his blog and also another alternative which some billionaires are working on are the 36 v 35 equation which http://whizzekid.wordpress.com  had written.

We do live in interesting times and Aziz Adenan the Youth Information has every right to issue this Press statement on the night it was tweeted,”We are dissappointed and hurt by the comment of Khairy Jamaluddin in Tweeter about Barisan National election performance in Sarawak Election 2011.”

THE MESSAGE IS CLEAR KJ WE HAVE OUR SOURCES WHICH SAID YOU ARE AVOIDING THIS SUBJECT.

THIS CAN”T BE THE KHAIRY WE KNOW……