The hours are ticking….Both sides of the political divide are using all their political knowhows and experiences to ensure that the voters know who to vote for come April 16th 2011 on polling day. Last day ceramahs,visitations and propaganda materials getting down to ground zero are a must as they are very important to sway the fence sitters.

In  the last twenty fours very personal and intimidating signboards have surfaced in the city areas. It is more or less provocative and asking the voters to reject CM Taib. The words used are very unbecoming and the Peninsular tactics have crept into Sarawak elections

BN propaganda has been to reach out to the voters through “letters of appeal” and also Reasons on why the Pakatan candidates should not be ELECTED. Its a last minute push and CDs are also distributed by both Pakatan and BN campaign teams. It’s getting rather hot on ground zero amongst the campaigners but the voters are still keeping their votes close to their chests.

The 1987 feeling of the BN/Maju group tussle is quite evident in this election and its very “calm before the storm” There is a very strong momentum gaining by the opposition and rumours are spreading like wild fires that.”There is a possibility of doing a rerun of “Selangor and Penang” in Sarawak 2011.

Billboards have appeared to be vandalised at some areas where the politiking has gotten to the heads of the people involved. Its really getting out of hand and police reports are all being made. The authorities concerned are taking all the statements and are looking at it with great concern.

No matter what the political parties throw at the voters in the constituency it will be up to them to vote on the 16th.Results will show whether the parties participating in this election are warmly accepted by the electorates or they have fallen on the wayside or rejected.

It has been one hell of an election campaign and many have work long hours and gave their all to the parties concerned. Those who work hard will see their fruits of success and they will be tears of joy if their candidates pull through. It’s the last leg and 24 hours is a very long time in politics. Until the voters mark the X there is still the chance to change their minds. 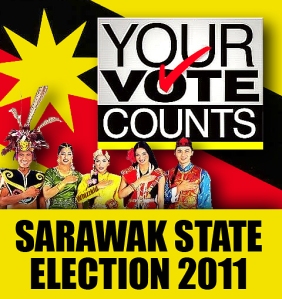 It will be a fair day for polling tomorrow morning according to the forecasts but afternoon will see thunderstorms. Lets all go out and vote without FEAR. Sarawak will go through the democratic process to choose the 71 candidates for the State Assembly.

MAKE SURE YOU BRING YOUR  IDENTITY CARD ..

Check up these sites for hourly and minute updates tomorrow early as they will cover the polling stations:-