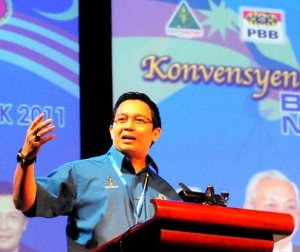 Fadillah Yusof the PBB Youth Chief was a surprising absentee from the youth speakers at yesterdays BN convention. The other component parties were all represented by their respective Youth Chiefs and they made their points heard.

Now the question is how come the person in question who stood on the rostrum was Wan Hamzah Wan Paie an exco member and also Ketua Demak Laut. By protocol it should be given to the deputy or even one of the vice presidents says a political observer. We attached herewith the full lists below.

A Pbb member even told audie61 that CM did call Fadillah towards him and queried him why? CM after questioning him left the stage and was seemingly not too happy according to our source.

Another political analyst said,”The organisers should put their foot down in that the Youth Chief of PBB and the BN Sarawak Youth Chief should address the delegates. But who are we to know what their political game is all about?”

A member of PBB who was at the dinner and who wanted to remain anonymous from a Kuching branch said,”He knows about the unhappiness and many were talking about it last night. Some are even saying that the Youth Chief passed a remark,”Let the small people speak. Malas mau cakap” He continued that,”this should not be a problem but some people in the pemuda or the MKT will find fault with Fadillah for this.But for now the enemy is outside in Pakatan Sarawak and not PBB itself.

But another thing which a member was very unhappy were all the exco team members especially the top tier of the Exco Youth notified of this action by Fadillah. Some are not amused at all and this is not very healthy as the BN is gearing up for the impending elections. Could Fadillah be luring out the people who are behind a blogsite which came out with this article:-http://sebanaku-sarawak.blogspot.com/2011/02/miri-marriot-confidential.html

If he is Fadillah chose the wrong time and the wrong place to punish the wrong doers. He has forgotten his role in BN Sarawak and as such he should have made an effort to stand up and be noticed by all. He could even stand next to Hamzah and said he would let him do the talking. This is not the time to give an opportunity to someone new eventhough he is highly qualified and the statement is not right.

CMs speaks about politics of reality and my GOD the rumblings are getting louder in the youth wing of PBB which we leave it to another day to cover. Like the PBB member who said,”Any problems kah in PBB..?