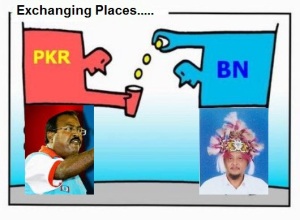 They both are at anytime politicians who will kick up a storm to create chaos which will benefit their parties and ensures it stays very relevant. Both are considered too very useful and are straight talkers and has no regrets in opening their mouths to lambast if they see that their CITIZENS RIGHTS are being suppressed.

However due to their characters and personalites many will not take kindly to their ways. It is with deep regret though that their leaders have to remain silent and to let them go to please the majority. Tedewin in an sms said,”I am only a mosquito and leaving PRS will not hamper them. However it a very big sacrifice for me.”

A PKR sympathiser cheekily said,”Maybe now Gobala can go to Sarawak without much hindrance and meet his adopted Parents in Kapit. Surely leaving PKR opens his doors and the immigration will close an eye to him.”

Both of them leaving PKR and PRS respectively are breaking news and many will capitalise on it. The reports can be seen by clicking here:-