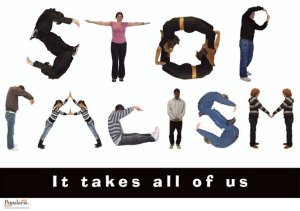 RACIAL SLUR. If you have any friends left or have they started to look at you one kind in the eyes.National Civics Bureau (BTN) deputy director Hamim Husin.

GOD BLESS YOUR SOUL IF YOU DO NOT KNOW WHAT YOU HAVE STARTED . HOW COULD YOU..?? Read here:-Why did you need to call Chinese as “si sepet mata” (slitty eyes) and Indians as “kaki botol” (alcoholics).

Thank goodness, those who utter racist remarks belong to a very small group, not even what I would call the minority.They do so ,if they are politics, because they are pushed to a corner or they are so obessed by deep hatred for a certain member(s) of another race after being insulted or because of outsiders’ perception of what their kind are like, which is usually not true at all.When you utter a racist remark you will be remembered for a long time. Two individuals did that, one a politician who did that many years ago, and the very people he thought he was championing rejected him so many times at the polls. Blame it on money politics? The other is one of the local politicians who think his kind no longer need other races to help them advance economically. He doesn’t know what he is talking about? His politics lacks the finese or touch of touch. There is surely a better word for cultural arrogance. Antho- centurian?

IN 2009 February 18th this happens “Anjing,keling’:Student files report” and we said,”Lets Kick Racism out of schools” and emulate the football culture of “Kick Racism Out of Football” Our article https://audie61.wordpress.com/2009/02/20/kick-racism-out-of-schools-malaysiakini/

One of our comments had this,”

Last year I commented. I will repost what I wrote here,”Racism should be left deep in the dark waters. But unfortunately it happens everywhere. Yes, I agree it is a matter of educating the generations. It is afterall a vicious cycle & we will never be able to completely banish this disease.
Kudos to the author for daring enough in bringing his thoughts in writing.

It seems when Najib is out of the country in his maiden speech at the UN General assembly when he said that moderates must now take centrestage instead of letting the extremists holding the world hostage by their bigotry and bias. Very well said PM Najib but unfortunatedly when you are not in town the SHIT HITS THE FAN.

What happened? Barisan Nasional leaders, minus Deputy Prime Minister Muhyiddin Yassin, today condemned yet another racial slur from a high ranking officer on the government payroll.

They also agreed that it had rendered another devastating blow to Prime Minister Najib Tun Razak’s 1Malaysia campaign. Muhyiddin, however, claimed to be in the dark and reserved his comments about the latest controversy.

BY THE WAY how is the investigation work on the school principals who insulted their students with racist remarks.?? Sooner or later if left unchecked it will escalate further and it may take even a different angle. Its time to clam down on this.

RACISM MUST REMAIN IN THE DUNGEONS OR ELSE WE MIGHT JUST BE IN FOR SOMETHING WHICH WE MALAYSIANS NEVER BARGAINED FOR.

Malaysians will know that we must never COMPROMISE ON RACISM. Its ugly,it scars and it hurts where even your heartbeat does not dare to venture.

Racism is not only calling names or marginalisation but it goes beyond that. My better half did comment to me that sometimes subconciously we forget that we are really ‘racist”. It only needs to be checked and tolerated.

LETS DO THIS TOGETHER SHALL WE AND SAY THIS..

To me racial lines,racial overtones,also racial “spat“ and practically a “fist in your face to prove your racial superiority” is a way back in time and the fight back for everyone has just begun.

LETS SEND IT BACK TO WHERE IT BELONGS…………

I SWEAR I FEEL THE PAIN…