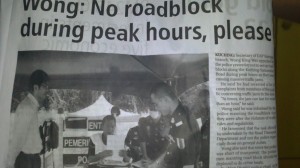 The lists of complaints from residents of Riveria,Tiya Vista,Midpoint,Unimas is growing longer by the day. The Kuching Police ACP Mun Kuok Keong’s has even asked the people to be patient as the setting up of road blocks has seen a drop in petty crimes. This we covered earlier:-https://audie61.wordpress.com/2010/07/09/bn-who-will-you-blame/

audie61 has also been flooded with phone calls today and with the DAP Wong King Wei requesting the Police now NOT TO set up roadblocks during Peak hours it seems that it is not GOOD ENOUGH.

IS THERE A SOLUTION…??

Surely, as audie61 thinking that the requests is heeded from 5-7 pm found out that mosts residents are only on the way home and will only reach their HOMES by 8pm. Moreover its a ROAD CONSTRUCTION AREA.

These are the pictures which was taken around 7.02 pm 13/07/10 to our disbelieve the Jam stretch all the way to Tabuan Jaya. We stop and told the Police in charge Zainuddin at around 8.13pm and he said that they are following orders and they have a job to do.

Fair enough,but the solution would be if only their colleague (a runner ) would have informed them that they have to speed up as they are holding up traffic and the HONKING is getting everyone VERY ANGRY and FRUSTRATED. (Took us more than 1 hour just to move a mere 1 Km.)

A resident even said ,”This is really Inconsiderate and too much.What happened to the COMMON-SENSE .!!” We were told by them that the opposition PKR  will be doing a Petition to move the Roadblock to another area.

Will they be able to achieve to move the roadblock away..??Will it work..?? Will the Police heed the public/residents complaints..??

We Will ALL Know as of Tomorrow……