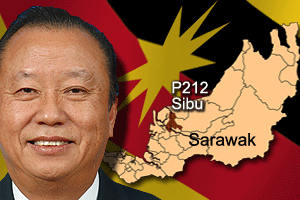 On behalf of audie61 management and crew we would like to extend our deepest sympathy to the family of the late Datuk Robert Lau Deputy Transport Minister and MP for Sibu.

May all the Perpetual light shine on him and may his soul rests in peace.

Headlines yesterday,”All is not well in Pakatan Sarawak” audie61 asked a PKR Sarawak Executive member,” Is it a diversionary tactic..?” Where and who are the candidates? Where does this lead to as PKR and DAP will also be fighting head-on for some of the overlapping mixed seats?

If  this is not a diversionary tactic by PAS or the Pakatan Sarawak set up it will really put a ‘spanner in the works“. A Sarawak voter bluntly said to Natasha of audie61,” They need to see out this problem or else the momentum will never swing to the Pakatan. Why fight amongst themseves when the common enemy is BN..? ”  PAS needs to look at its strength in Sarawak  and dont throw the whole coalitions good work into the dumpsite.”

Today SNAP President Edwin Dundang even told PAS to be realistic and not to be arrogant in claiming seats for the next state elections. He said each party in Pakatan Rakyat(PR) must not be greedy for power in the fight against BN.Instead it must ensure that it has good candidates,enough resources,good ground support and not to be seen to be greedy. “I emphasis once again that PR must be very focussed in the allocation of seats to ensure one against one contests as far as possible.

In so far as SNAP is concerned the President said,”SNAP does not want any conflict with DAP,PKR and PAS over the seats distributution. Meanwhile in relation to the seats allocation in a PC the Sarawak State PKR youth announce the movements intention to contest in the 6 state seats of Satok,Semariang,Kedup,Bekenu,Katibas and Repok.

Clearly the signs are there that with the imminent dissolving of the state assembly the Pakatan and BN ground movements are evident.Those who can conjure enough support and resources are all putting their names to the respective parties for consideration. It seems that there will be also Independants who will try to join in the race as in any elections now a “SURE WIN IS NOT RELEVANT ANYMORE.”

Those who aspire to be candidates must be seen to be accepted by their respective parties as a Winnable candidate be it from BN or Pakatan. PAS and PKR Sarawak Youth have openly claimed stated their intentions and its up to the PAKATAN STATE ELECTION BUREAU to consider. BN will do likewise and of course they will also be “dissatisfaction amongst their ranks”

Will the elections be called soon….?? Only one person has the dates close to his chests and its up to him to have the INSPIRATION…………………