“Brunch” this morning with various party members threw up yet the subject “Succession to CM Taibs throne” As early as 1994 this subject which has interested the party members still remains a mystery even  though the PBB Convention has just concluded on the 5th of March 2010.

Taib will not be drawn into rumours of personalities being groomed for take-over but instead he will look forward to leading a team of dedicated,disciplined and united PBB together with the other BN coalition partners in going fr a FRESH MANDATE  from the rakyat. The succession speculations can be left to another day which Taib  has held it close to his chests.

There has been many reports on WHO and WHEN he hands over the baton says a party member who wishes to stay anonymous from the northern region. The guessing game does not augur well as there seems to be an alignment of various leaders as they look forward to the day Taib calls it a day.

The main political reason,’They fear that they will be LEFT OUT COMPLETEDLY. He pointed out an article which was posted in Bintulu.org some time ago. audie61 checked it out and we have the posts below. 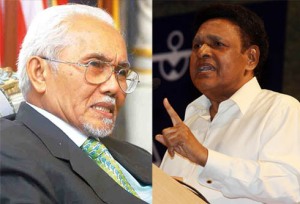 What is Taib Mahmud, Melanau Muslim strongman and Malaysian Indian Congress (MIC) president Samy Vellu has in common? In one word ‘long‘.

Tan Sri Taib Mahmud was appointed Sarawak chief minister in 1981. Thus he has been in power for the past 28 years and counting.”My position as PBB president is for the party members to decide and I am leaving it to them to decide. I have openly said I am ever willing to step down as president any time now but party interest has the final say,” Taib said  in Betong.

Last month MIC’s supremo Datuk Seri S. Samy Vellu announced that he will only step down in 2015.

“No one should doubt that he will keep his word. This means, wait for it… by 2015, Samy Vellu would be the winner of the “longest” time in power.”

“He was elected president of MIC in 1979 and by 2015, he would have held the MIC presidency for 36 years!!!”, says Prof James Chin an expert in Sarawak politics.

The State Elections will be called very soon as in two months time the present STATE Government will go into its fourth term. Taib has until July 2011 to go for a FRESH Mandate and its up to him to have the INSPIRATION to pick the dates.