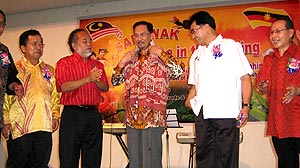 Bugi Wijaya was not his usual self this morning as he thrudged towards Gaya Street Fair.  His head was still spinning as last night there was too much political discussions amongst friends and families and how Sabah has missed out yet again.

His usual sigh of anguish Ayo,ayo in Sabah affairs had me,by the way Im Cindy of audie61 trying to motivate him again. Just then as fate has it,   Shamsul a PKR member from Sabah cropped up. It only took seconds and his eyes just lit up.

We had breakfast and here lies the usual talk as the economy is not worth mentioning and others not even worth considering on this Sunday morning. A recent poll shows that in the Philippines 70% of the population loves to talk Politics and we in Sabah likewise.

Shamsul who is in his late 50s was keen to touch on just political issues.  Only this time his rhetoric is not as animated as before.

Obviously dissappointed with the court decision to overtune earlier decision to call for a by election for the Pensiangan parliamentary constituency.  He says it is all game over as we can observe from what is happening in the whole country. Sabah misses up again.Let me touch on Perak.

Perak is now rule by BN no matter how they go to court, the court will support the government of the day that is BN.  Their network are too big to unravel and its too late for Pakatan to move for a change in government.  The coming by-elction will be won by BN, says Shamsul without elaborating.

When asked on the possibility of changes in the government in the next coming general elections, Shamsul says BN with a smarter and shrewd PM would effect changes in the next redelination of election boundaries to make sure BN strongholds will be increased. After all, BN under UMNO control all the various government agencies from the MACC, Judiciary, Security, election Commission.

Cindy said Bugi told Syamsul ,”Which reminds me of the match of the week last night between Liverpool and Manchester United.  In the end it will still be the Red Devils who are champion.  Why? because their mindset and consistency are like champions.”

Just then our source from Malaysiakini said that one Sabahan is going to get his hands burnt. He is meddling in Sarawak now. Our Datuk Dr.Jeffrey Gapari Kitingan has said he is in favour of PKR Nicholas Bawin Anggat to challenge BN. Jawah(former MP) who is the other candidate been considered.( read further)

He denies that Bawin has the edge in the party’s selection process because of Jawah’s close links with former PRS deputy president Sng Chee Hwa, who was reportedly instrumental in efforts to wreck his former party and also Parti Bansa Dayak Sarawak (PBDS) – where he was senior vice-president, which has since been deregistered.

Harrison Laing has said this last week to Malaysiakini,”“Even Leo Moggie, when he was PBDS president, warned everybody against Sng,” It seems that Kitingan has been parroting and echoing the same statement as he stands behind Bawin as the PKR candidate. There are others to who beg to differ.

This posting which has ruffled a few feathers especially as its said,”Of course,Sng is a problem just as he has been in the other parties where he has been involved. Jawah has to distance himself from Sng for his own good and that of the party. We are not a party to collect projects,”said Kitingan. (Ooooops!!! What is happening here..???  )

We say as always,”  Batang Ai will be closely watched by us Sabahans as our Kitingan is sure to get a some tongue lashing when or if they crossed swords.Is Kitingan helping PKR with this statement? It remains to be seen.BN PRS is silently laughing at the corner hiki hik hik…….

Every picture tells a story and an emeritus professor was quick to point out to Joey of audie61. He said,” you just look at these pictures,compare them and tell me what’s wrong.” We have written earlier on this subject and we are not going to ‘Kutuk,Kutuk ,Kutuk” again. Judge for yourselves and you will be uttering the words,”Correct,correct,correct” Hmmm..Isn’t Politics about Perception..???

It seems that “Nearly…all Hell Broke Loose” as the Sarawak tabloids,also the internet portals and blogs are cashing on this subject.”

Malaysiakini portal played this up,”The ailing chief minister, in a huff, refused to announce the name at a press conference and stalked out after reminding Masing starkly that BN chief and outgoing Prime Minister Abdullah Ahmad Badawi had yet to endorse his candidate.

We say as always,”  Every picture tells a story and you will have your say. At audie61 Joey said we have had enough phonecalls to satisfy Maxis ,Celcom and Digi for todays profits.

Yesterday we posted this article BN-PRS candidate is confirmed by PRS President to the Press and media as Malcolm Mussen Lamoh.

Malaysiakini also disputed on the claims as who announced it and whether its PRS President or the CM Pehin Taib. Todays Sarawak Tabloids are full of it and this English Tabloid headlined has,”MUSSEN Likely BN man for Batang Ai.” This part of the statement  is the ‘One ” which many political analysts says is the killer and most poisonous words.

CM Taib said,”We have unanimously endorsed the PRS candidate.As a normal procedure,I will be putting up the name for approval by the PM Abdullah.The PM will probably do so in the next two days. However,Taib withheld the name of the candidate. Neverthless,PRS President James Masing later revealed the candidate’s name to the press.

In another related matter to this the PM when questioned by reporters in Penang he said,’If Sarawak BN,wishes to get confirmation or endorsement from me as the BN Chairman,I have not officially received the proposed name.”

Well,well,well it seems that something is not correct,correct,correct here. A lecturer friend of mine said,” Siapa itu yang lawan BN towkay..?” Now it puts Mussen as the pawn in a bigger picture “Is he, or is he not…??”

There has been speculations that PRS President made a wrong turn and thats why PM says he has not been officially told.” He is still after all the PM and the protocol line is breached. Political intriques..??

We say as always,”  We live in interesting times. There must be a Twist in the Tail..!!Anwar will have something to say on this..Watch this space………..