PM in his opening address in the Gerakan Annual Congress Malaysiakini report headlined:BN Mulls new multi racial group.  The full report http://www.malaysiakini.com/news/91077 He said,”“There are people who don’t want to be members of a component party but they like BN, so I proposed at the last BN meeting the creation of a group who are direct members of BN,” Elaborating, Abdullah cited examples of Malays who prefer a multi-racial party and do not want to join Umno or its rival PAS, both Malay-based party.

“Gerakan wants to be multi-racial but it has not become what it should be,” said Abdullah as he turned to Gerakan president Dr Koh Tsu Koon and told the latter “you have not achieved the purpose” of why the party was founded.

While some of the members of PRS were having satay Zainon our BL executive committee member said,” This is what its all about.” We didn’t know that PM has mulled the idea of multi racial BN but she has always been very happy associating with PRS as there are 10 ethnic groups in Batu Lintang Division alone.

All our members are so closely knitted and as a group we are very committed to PRS “Vision and Mission” and the Multi- Racial Concept and we see beyond what is in store in the future. Whats more now as the BL Indian Bureau chief Narashima elaborated after reading the Malaysiakini report that PM means what he says.

PM says“It’s an idea that I have floated, it’s something that you must think about. I know for a fact that there are many who support BN, who want to be closer to BN, want to have an opportunity to interact with BN leaders and requesting BN to do this and that.

This year’s Hari Raya open House is certainly going to be a memory worth remembering for MP Nancy Shukri(Batang Sadong) .Being her first open house as an elected representative,she was overwhelmed with the turnout at her residence.

In an interview to the press and Natasha of audie 61 she said “I am very,very happy that so many people from all walks of life have turned up.”She said what really touched her were that those who showed up were not only those from the Malays community but also other various races. I am happy because Hari Raya is not only celebrated by the Muslims alone but the other races are also sharing the joy.

Nancy further added,”This is something very good because in a way or another it helps us to preserve harmonious racial integration,which is the way we should live in a Multi-Racial state like Sarawak. Hopefully such culture will stay forever.

Multi racialism is very much alive and kicking in Sarawak. The second echelon leaders needs to practise what is being handed down by the senior and veteran party leaders. In PRS Batu Lintang we always practise .”IF you are GOOD enough,You are OLD enough.” It doesn’t matter whether you are black,yellow.brown,white or whatever religion you are and we only look at your POLITICAL CAPABILITIES to lead. Surely,we have some political differences but it is usually solved amicably.

Our PM did say,”Work with me and not for me.” and James Masing as President of Parti Rakyat Sarawak echoed these words” It is reminiscent to all of us as Malaysians on how well we can work closely together regardless of our background,culture and religion in order to bring stability through racial harmony in alignment with the true spirit of Barisan Nasional for the benefit of our State and Country. 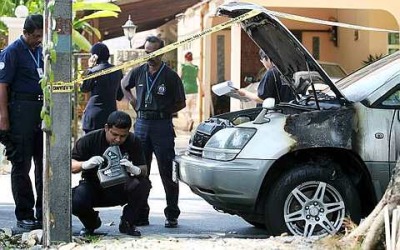 I will not be the first nor will I be the last to say that It is not “ROSEY” anymore in Malaysia. Times are bad in the big cities in the peninsular and everyone are trying to make ends meet.Up steps more crime related cases.In this Malaysiakini report http://www.malaysiakini.com/news/91065 DAP leaders in Charles Santiago and Tony Pua has summoned up their courage to speak for the people in certain areas of concerns. Will they speak “MORE” for the Rakyat in Parliament come Monday 13/10..?

The reason why I make this statement is because in this Malaysiakini report it says,” According to the DAP parliamentarians, instead of addressing the concerns of the people and coming up with concrete steps to stave off economic hardship, government leaders were more interested to jostle for political ground.” The avenue is the Parliament.

Speak up~! Even the crude oil prices have gone down but our petrol prices are still stuck above M$2/-. Prices of goods are increasing daily especially those that are not controlled items. Small Supermarket owners,hawkers,even ‘local syndicates” are tightening their belts and finding ways to supplement the rising costs of everyday living.

Two weeks ago,the accident at Mile 20 Karak Highway which happened to my brother in law when he said ‘Oil’ was spilled on the road by syndicates.’ Is it as “I WAS BEWILDERED..? Cannot be, the heat of the day must have made the tar sealed roads slippery at night as temperatures cooled. The presence of tow trucks in the vicinity however had me questioning myself,”Is there some truth in this allegation.? My brother in law spun 360 degrees three times and said his life spun infront of him. My niece who was sleeping at the back woke up with bruises on her arms and parts of her body. In the opposite direction a woman driver at about the same time also spun but her car turned turtle and the last they heard she is in ICU.

Is this a way of making quick bucks? Is it at the expense of ordinary folks? Is business so bad that they have to resort to this tactic? Are local syndicates involved? My brother in law has since made his police report and the police are investigating. What sparked me into writing this article is also this coverage from Star on line.

Petaling Jaya OCPD Asst Comm Arjunaidi Mohamad said police were investigating the possibility of a syndicate “forcing” residents in Kelana Jaya to employ the services of a private security firm. its too simple don’t you think,” A witness who declined to be named, said he saw two men in a four-wheel drive vehicle drive past his house.One of them, who was standing at the back, lit a Molotov cocktail and threw it towards his car.All vehicle owners have since lodged police reports.

It seems with the economy on a spiral downturn many people will be affected with the the rising crime rates. Surely,they will be more pickpockets,robberies,extortion and syndicated ways to make more dollars. What else can they do. There are jobs in the market but the economy is stalled and the multi level ways(Subcontracting) of getting contracts is halted.

Why.? The Big Fishes don’t have enough fore themselves to eat how can the small ones survive? Also there has been too much politiking and enough time has been wasted. The civil servants are also affected and their excuses are usually,”TUNGGU ARAHAN MENTERI”. What has happened to the M$1Billion offered to sarawak and Sabah for rural development projects?

I know from my sources that the blue print is ready but the implementation of the projects is waiting for the PM to give the go ahead. With Najib as the Finance Minister and designated PM these projects should be TOP PRIORITY. The UMNO elections are in March but the people needs these projects for spinoffs and make the economy “ALIVE” says a local syndicated money lender.

Even the “Alongs” are in bad shape says a runner. Nowadays we hardly hear “ALONGS” making headlines but Robberies,Snatch thefts,Burglaries are TOP LISTED.  Even the people involve in crime knows how to CHANGE. Whatmore to say about Barisan National.. ? If there are no Changes and Reinvention, BN will be Replaced by GE13. Its 4 years to go before the next polls and its not a long time. In a flash it will be the year 2013. So inorder to BRING DOWN the statistics in crime related cases the Economy needs to be we say again,‘A..L..I..V..E….”