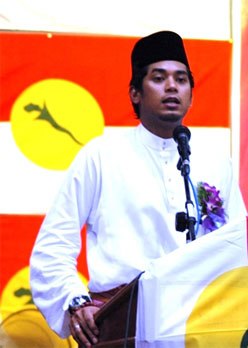 The strategic considerations by the UMNO youth to pick a new leader to take over from Hishamuddin Hussein will take centre stage in all the meetings till November 9th. In this Malaysiakini report http://www.malaysiakini.com/news/90976 headlined Khairy gets 1st nomination for Youth Chief, it just goes to show that delegates believed Khairy was better able to take the Youth wing to ‘greater heights’.

Why is this so since the Machang Youth division had been tipped to nominate Mukhriz, the son of former premier Dr Mahathir Mohamad? This should be a landslide win for Mukhriz since the division has indicated their sentiments and allegiance before the votes were counted. Is this an indication for all the youth wings to follow? Khairy’s father inlaw PM Abdullah has announced he will step down in March but when you are still in the “CORRIDORS OF POWER” the influence is worth already 10 votes. Khairy’s whispers can still create the ripples in the calm lake to develop into a WHIRL POOL. The road to survival or ruin will depend on how the divisions and aspirants for the posts play their cards.

Khairy, the son-in-law of Prime Minister Abdullah Ahmad Badawi, faces a tough fight against Mukhriz Mahathir, Dr Mohd Khir Toyo and Zahidi Zainul Abidin for the influential Youth post. For now Khairy has the 1st one in the pocket and many political analysts says it is still a tough road ahead for him.

Khairy knows that Tun Mahathir has thrown down the challenge to him and he will be wary of the traps that will be in his path. Earlier, Mahathir had taken POT SHOTS by saying Khairy would employ undemocratic methods to ensure his victory.Khairy needs to fully concentrate and wholeheartedly give his all in his quest to be the Youth Chief of UMNO come March 2009.

I’m sure when the results were announced you could hear a pin drop and the walls of Perdana Leadership Foundation must have  reverberated loud and clear. Khairy’s election machinery will be tested to the fullest in the coming weeks. Like they say in football,”Take your chances or else by the 90th minute you live to regret.”….