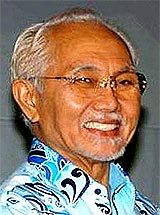 Tony Thien Malaysiakini Sarawak correspondent picked this up from a local daily quoting the CM of Sarawak http://www.malaysiakini.com/news/88803. “Let him continue to brag. The word is ‘brag’. I covered it yesterday with an article ,”POKOK MASIH GOYANG” . I even received an sms from an architect friend saying that PRS president James Masing must have meant “they don’t jump over like frogs,they will fly over like hornbills.” I thought he did say that but upon checking he did say,”Sarawak is the land of the hornbills,not the land of frogs.” Very imaginative and trying to twist words but it did convince me for awhile. Anyway i still think that sms is a useful tool but do not abuse and create mayhem or uncertainties.

Going back to Anwars September 16th target. Well. not unless Anwar can deliver nobody will believe. I did ask Anwar ,”Show me the first 4 MPs” Now it seems that everyone in BN is getting on the bandwagon and condemning Anwar for rattling the adminstration and calling a ,”BLUFF.” If he manages to do it ,it is a real good one and in the end it will turn to reality. That is one of the reasons the top leaders in BN are looking and keeping a ,”hawks eye” on the YBs.

James even went on to say,”I think dreaming is not a privelege for those who are asleep.Dreaming can also be for those wide awake.” He is feeling confident that a number of divisions have woken up to the realities and that he is the President to lead them. When a leader sounds “Convincing and shows leadership” qualities his members feels secure. The ground is very favourable towards PRS divisions coming back as a unified entity. Talks are progressing into the final stages according to a source. As a coalition partner he and PRS is standing steadfastly behind the CM and BN government.

A political secretary to the CM from PRS echoed that the party is behind the CM Taib and also had the same views that the voters views should be respected that they have given the BN the mandate to rule after the GE of March the 8th. We have 4 1/2 years until the next GE. Can’t Anwar wait..? echoed a senior party member. There are many equations and if September 16th is not achieved Anwar will have losts a lot of credibilty. But if he manages to push his agenda through the term,”INFODEMICS” will be used by many.

President Lee was under siege as rumours of the the mad cow disease hit him hard.

So Anwar is it real or just a brag? We know that internet has become an active space for information and engagement and Anwar is capitalising on this. The MALAYSIABOLEHLAND script gets better, there are 18days left to September 16th…….