Fauwaz abdul aziz filed a late report for Malaysiakini http://www.malaysiakini.com/news/84931 and he questioned,” Why the debate when the decision has already been made and executed? Parliament approved of the restructuring of unsustainable fuel subsidies, including the June 5 petrol and diesel price hikes.The government motion was carried with 129 voting in favour and 78,all from the opposition, voting against.

I was having coffee late today as usual $1.20 now(up 20cents) with my petrol station operator and he was very unhappy with the Government. We still get the same commissions 9% and the 23000 litres from the tanker costs us everyday $60000 “cash” to pay the oil companies. If only we were informed that prices would go up in August we would have made the necessary provisions. What to do..? Decision already made 129-78.

However he supports the declination of credit facilities by credit card. Its a business decision. After the fuel price hike we, petrol station operators have to cut costs. I feel sorry for some of my friends in this business especially in KL. 80% of their clienteles are using credit cards. WE know,and the real reason (it takes 3 days for the merchant houses to process the payment) Shhhhsss!

He told me and I for one missed out on Musings with Marina Mahathir on June 18th “You Walk the Talk First”. After going through it I do feel its worth re-posting her full article and I appreciate it if she does not sue me for copyright infringement. Hehehe. By the way ,Marina binti Mahathir is the daughter of the 4th Prime Minister of Malaysia, Tun Mahathir Mohammad. She is well known as a leader in many non-governmental organizations and is currently an active socio-political blogger.

You Walk the Talk First

WITH the recent hike in fuel prices and the Government’s exhortations for us to change our lifestyles in order to cope, may I provide here some suggestions for the Government and those who work for it to “share our burden”.

1. Stop having meetings, especially out at resorts, far enough away to be able to claim transport allowances. Have online meetings instead or teleconferences. Use Skype or chat.

2. No need to order special pens, bags, T-shirts, notepads and other goodies for those same meetings.

3. No need to order kuih for mid-morning or teatime meetings in government offices, or nasi briyani lunches for those meetings that happen to end just at lunchtime.

4. Cancel all trips for government servants to conferences overseas unless they return with full reports of what they did there, who they met and what they learnt and how they mean to apply what they learnt at home. Ask them to do presentations to colleagues who did not get to go, on the most interesting and important papers that they read.

5. Scrutinise invoices for contracts to make sure they are truly reflective of what those projects or supplies cost.

7. Make all civil servants and politicians travel economy class. That means really travelling at the back of the plane and not buying full fare economy class tickets that allow them to be upgraded to Business Class.

8. Stop having the full complement of police escorts to cut down on petrol costs. If they need to be somewhere by a certain time, start earlier like the rest of us. Wouldn’t be a bad thing for them to also experience a traffic jam.

9. Once a week (or more), have ministers use public transport so they know what everyone else has to suffer. This might provide them with the incentive to improve them.

10. Once a week, let ministers go to a market to buy food for their families with instructions to not spend more than RM100.

11. Get ministers to carpool. They might get more work done just by being able to talk to each other to see what can be coordinated between their ministries. For instance, the Ministers of Health and Women could discuss what to do about women’s health issues in the car on the way to work. Maybe have a secretary to travel in the front seat to take down notes on what was discussed. By the time they get to their offices, things can get implemented.

12. Once a month, get civil servants to work with one disadvantaged group in order to be better able to appreciate their problems. It could be blind people one month, hearing disabled people the next, orang asli the following month and people living with HIV/AIDS after that.

We could start buddy systems which pair one civil servant with one disadvantaged person and at the end of it, ask each pair to make recommendations on how to make life better for each other. This might get rid of the problem of desk jockeys, people who never stray very far from their desks yet make policies for people they know nothing about.

13. Have PA systems that shout out the name of the officers who have to serve people at government offices so that people get the services they came for and don’t have to keep coming back just because the officer was out having coffee.

No counter should be left unmanned for more than five minutes before the officer is paged to go back to their stations. This should cut down waiting time for the public and save them transport costs in having to keep returning just to get one thing done.

14. Government officers who lose people’s files should be fined and have their names publicised for being careless and causing inconvenience to the public. Instead of making the public travel to their offices several times to deal with their problems, they should travel to go see their client and deal with it right there and then.

And every officer who goes out of the office should be given a reasonable time to get his work done after which he is expected back in office so he doesn’t waste time doing something else.

15. And newspapers should save paper by reporting real news rather than non-news that they carry, particularly nonsensical utterances by politicians.

As they say, we need to do this all together in order to make a difference. So if the Government and politicians make these lifestyle changes, I will do my part and change mine.

Cheerio!! We feel that No. 11 should be practised more by our YBS. Very True…….. 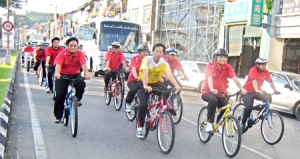 “They shouldn’t make a gimmick and this is not in line with their status as (MPs),” HOLD ON..!!!Recognise the above picture. Looks like his colleague and Minister Of Youth and Sports Sabri rode a bicycle from Kuching Hilton to Kuching Waterfront together with Hamden and Dr.Abdul Rahman.It looks like the government’s latest cost-cutting measure is taking a foothold here with several ministers riding bicycles to ‘work’ yesterday morning says the Borneo Post. Cheap Publicity..?

In an interview this morning at 10.30am Datuk Marcus Mojigoh said it again,”Cheap Publicity”. Politics as we know is all about Perception. Give them a chance to show that they care as the whole of Malaysia feels the after effects of the price hike.

Politicians will try whatever means to stay in Power and once they have ascended that “throne or chair” coming down is a hard to take. MPs have an avenue to talk for the people and the Parliament house is where all issues are to be deliberated and thrashed out.

We just hope that they do not forget why they are elected into Parliament.